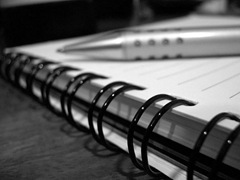 If you hadn’t heard by now, there’s a strike brewing in Hollywood. The Writers Guild of America wants higher home video residual payments and the Alliance of Motion Picture and Television Producers isn’t giving in.

The guild is meeting at 7:00 tonight in Los Angeles to further discuss how the strike’s going to go but its website already has the 2007 Strike Rules in place.

One rule, in particular, caught my interest. It says; “The Rules prohibit writing services performed for a struck company in connection with new programming intended for initial viewing on non-traditional media (such as the Internet and cellular telephones), and the option or sale of literary material for that purpose.” Basically, no writing for websites owned by big media companies. No rules against online ventures that you start yourselves or that are owned by someone or something independent of the companies against which you’re striking.

Reuters makes a very interesting point concerning all of this.

“The last time the Writers Guild of America went on strike, restless viewers turned to cable, sending the category into a growth spurt that continues to this day. With a writers strike set to be announced Friday, the question looming over digital Hollywood is: Can the Web become the cable of 2007?”

I like that idea. I like it a lot. First, because I’d love to ditch my cable provider (Comcast) which I feel has been charging me WAY more for TV than it’s worth but provides adequate Internet service. Second, because the idealist in me would like to see NBC flounder enough that Jeff Zucker would get ousted. This strike isn’t his fault, I know, but I’m hoping the NBC continues to act irrationally enough to blame it on him.

Yes, I said it. I don’t care for Jeff Zucker’s idiotic ramblings and his backward perception of how technology ought to work provides little to no benefit to consumers and offends me as someone who’s passionate about the subject. The one intelligent thing that I’ve heard him say actually came about because of this strike; he said that “a strike could be a ‘watershed event’ that ‘drives more people away from primetime,'” according to Reuters. Sounds good. Let’s get that train rolling then.

To those of you in the Writers Guild; whether or not I agree with the reason you’re striking, I wish you the best of luck and I hope you consider creating content for the web. And if you do, I hope you’ll realize that you don’t need the Alliance of Motion Picture and Television Producers to get that content onto the Internet. Remove the slow, old, awkward, paranoid middle man. This is a great opportunity to change your distribution system. If all the content you created went straight to the web, you’d save us consumers a lot of time and money.

Entertainment on Web could bloom with strike [Reuters]