Hot on the heels of the launches of Disqus and Intense Debate, commenting reputation system SezWho has raised a $1 million series A round from KPG Ventures and upgraded their offering. The investment makes SezWho the best funded of the small group of startups currently trying to improve community for commentors. Considering how enhanced commenting somehow became a more competitive space overnight, the money also came at a good time to help speed development. 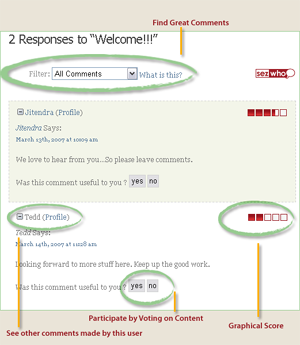 SezWho has a more basic offering compared with Disqus or Intense Debate, but with a much lower point of entry. It doesn’t entirely replace your comments or wrap them in a fully featured social network. Instead it focuses on simply helping separate the good commentors from the noise by adding ratings and reputations to your blog comments. The WordPress and MovableType plug-ins let readers order comments by rating and explore the history of their commenting across SezWho enabled sites. The plugin doesn’t require users to sign up for a new account, but rather links commentors based on email address. If someone tries to hijack your reputation, though, you can claim your email address and remove the unrelated comments. VentureBeat and reportedly over 300 other sites use the system, totaling over 100,000 users. Today’s press release also says that the service will work across forums, social networks, and wikis, although that’s not currently the case.

Comment ratings are determined by other users simply answering the question, “Was this comment useful to you? Yes or No”. But not all votes are equal. Commentors with higher overall “star” ratings from consistently highly rated comments have greater weight attached to their votes. SezWho also has a “Red Carpet” widget that highlights a site’s top rated commentors to encourage more participation. Readers can sort the comments based on these ratings and view other blog comments from users by checking out their profile, all via an AJAX popup. The idea is that users will be drawn to comments left on other sites and drive traffic across all SezWho enabled blogs. SezWho has some analytics tools that expose exactly how much traffic other sites are drawing to your blog.