What do you get when you cross iTunes with a web browser? You get Songbird, an application built on top of Mozilla Firefox’s core technology that serves as a platform for media websites that want to integrate tightly with a desktop media player.

We last wrote about Songbird over a year and a half ago when version 0.1 was released. Tonight, Songbird releases version 0.3, which the company considers its equivalent to Firefox 1.0. 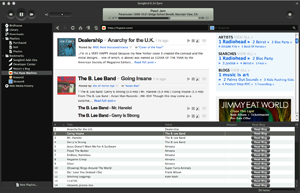 Perhaps the best way to explain Songbird is to compare it what Apple has done with iTunes. While iTunes is a traditional desktop application that must be downloaded and installed, the iTunes Store within iTunes is actually a website that meshes so seamlessly (and exclusively) with iTunes that you don’t really realize that you are browsing a website when looking for music to buy. Click to purchase some music and the iTunes Store website communicates with the iTunes desktop client to trigger certain functionality, like a user prompt and then a file download. Apple is able to contain the entire shopping experience within its media player, making the consumption of new music very convenient.

Now suppose you’re a media company that wants to set up shop within users’ media players the way Apple has set up shop within iTunes. You could try to hack together a plugin for iTunes, but you won’t get the same results and you’ll be subject to the whims of proprietary software. With Songbird, you have access not only to a fully-equipped desktop media player but also a set of open APIs with which you can easily mesh your existing website with Songbird (see developer center). For the most part, developers just need to program their websites to take advantage of a Songbird DOM object in JavaScript. You can also build themes and plugins for Songbird as you might for Firefox, since the application’s architecture is fundamentally the same. 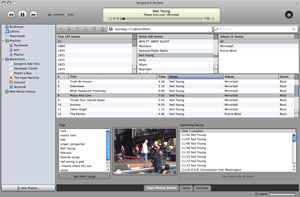 Songbird turned to Mozilla technology for its product because it wanted operating system agnosticism. Also, other possible web-to-desktop platforms, like AIR, were not created with an open source philosophy nor designed well enough for large-scale projects. Songbird envisions its platform being used not only for track download services, but for services based around any type of media such as video.

The Hype Machine, Insound, and SkreemR have programmed their websites for Songbird and are packaged with the latest release. A screenshot of the player I saw on their website also suggests that an iLike integration is in the works.

Songbird closed $8 million in funding from Sequoia Capital and Atlas Venture in December 2006. The software has been downloaded around one million times so far. And the company’s developers previously worked on Winamp and the Yahoo Music Engine.