Yahoo is releasing version 9.0 of its popular instant messaging software, Yahoo Messenger, for Windows tonight. All in all, the update contains nothing revolutionary but does introduce some useful features.

Most remarkably, you can now add embed objects – such as movies, images, and maps – into chat conversations. Also handy: you can synchronize the playback of online videos and share Flickr photos in a slideshow, although only with one friend at a time. 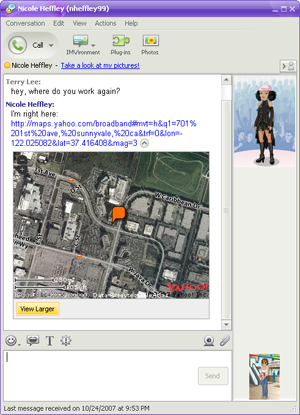 Yahoo has also redesigned the user interface of Messenger’s friends list, bumped up file transfer limits to 2GB per-file, begun automatically scanning transfered files with Norton AntiVirus, added call forwarding to its VoIP offering, and designed new skins. Users can now send SMS messages to their friends’ cell phones with the desktop client. And Messenger has been localized for six new markets – the Philippines, Indonesia, Malaysia, Thailand, India (in Hindi), and Vietnam – raising the sum of localized versions to 25.

While AOL has the most unique instant messaging users in the United States – and MSN has the most worldwide – Yahoo claims that their user base grew by 19% in the past year whereas AOL only grew by 2%.

I asked Yahoo representatives whether they were planning to integrate Yahoo Messenger with their other properties, such as the new social network Mash, but they declined to give any specifics. Hopefully their vague insistence that Yahoo is always looking for ways to integrate its products will lead to something experimental and new, like a Yahoo Messenger-Mash hybrid. A “real-time” social network with extensive chat, messaging, and VoIP calling functionality would be very interesting competition for Facebook and the like. It would also up the ante on MySpace and its integration of Skype, and take on startup FlickIM.