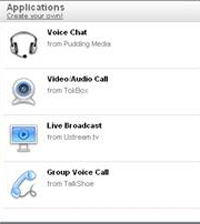 Like Facebook Platform and the recently announced MySpace Platform it consists of a set of APIs to give developers access certain user features and information. Developers will be able to include Flash applets and Javascript snippets within the applications.

Unlike MySpace and Facebook, however, the platform is not open to all who choose to come. The company is announcing four partners this evening and opening up a sandbox area for developers to build potential applications. Those that Meebo thinks will make the user experience richer, will be permitted to launch.

Four partners are being announced this evening along with the launch. All are communication based: Tokbox (video chat), Talkshoe (conference calls on the fly), Ustream (lifecasting) and Pudding Media (PC to PC VOIP calls).

Games and other types of applications will come next. Basically, any type of application that can benefit from having either instant access to friends who are online right then and/or the need to communicate with them via instant messaging, would do well on the platform. With the communications partners, they simply use the friends list and presence indicator to help start a voice or video communication on the third party platform. For gaming and other applications, it may simply embed a game within a chat environment, allowing players to communicate real time with each other.

Meebo will also be hosting an open-door developer day on November 22 in their Silicon Valley offices. Developers can show up, show off their applications, talk to Meebo about potential applications, etc.

We mentioned current Meebo user stats in a post about them last week.

The image below shows the Tokbox application in action. 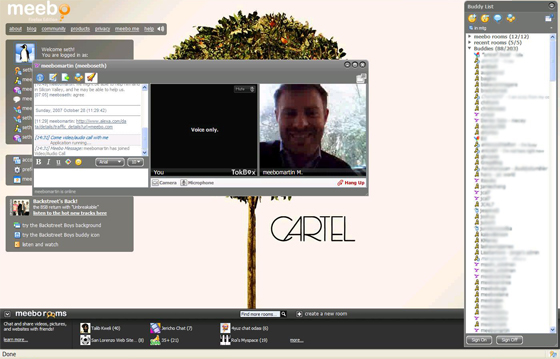