This is an especially good week for payment service provider Payoneer which is announcing it has received the remaining $3M of a $4M Greylock investment , and a new deal with iStockphoto.

Payoneer offers Web-based businesses a method to pay their members/users/partners by way of prepaid debit cards. The fully-functioning debit MasterCards are issued to payees worldwide and can be used online, at points-of-sale, or at ATM’s for cash withdrawals in local currency.

PayPal requires a bank account to transfer funds internationally. To confirm the bank account, PayPal makes a micro-deposit (a few cents) into the account, and then has the payee report back the exact amount, thereby “proving” account ownership. The problem is that for this process to even take place, the banking institutions in the country where the payee resides must support EFT (Electronic Funds Transfer). Not all countries do. For example, India, China the USSR countries, and some Latin American countries don’t. (Incidentally, this wacky process is why I still don’t have a PayPal account… I’ve gone through it 4-5 times in the past few years… The micro-deposit doesn’t register in my account immediately and by the time I remember it, I’ve already made the purchase in some other manner). 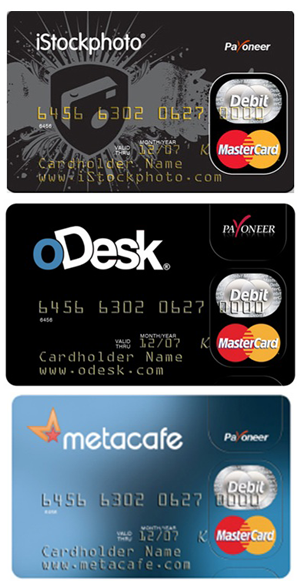 On Payoneer, account verification—a PayPal staple—is a non-issue. Anyone worldwide over 13 can get a card and get paid. Cards require one-time shipping and are then loaded and re-loaded electronically by Payoneer. Convenience-wise, the hassles and high fees normally associated with Wire Transfer and Check payments are greatly reduced or, when a bank is involved in the process, averted completely.

Other than the expected back-office goodies, Payoneer offers its business customers a branding and retention tool in the form of a co-branded MasterCard (see examples right).

Payoneer is also announcing the addition of iStockphoto to its client roster. By the end of the year, iStock will begin offering Payoneer as a payment method to its 35,000 contributing artists who earn royalties on the sale of their images and videos. Among Payoneer’s 70 clients are oDesk, MetaCafe, Amie Street and Plimus.

Founded in 2005, Payoneer employs 25 and is headquartered in New York with R&D in Tel-Aviv, Israel. A $2M seed round was raised from Payoneer’s CEO himself, Yuval Tal and private investors including Zohar Gilon, Charlie Federman, Michael Loeb and Ilan Kaufthal. Greylock (Israel) added a total of $4M in Series A this year, with Moshe Mor the partner attached to the deal.