The big promise of advertising on social networks has always been the ability to target members by their own self-proclaimed interests and demographics. Facebook, as expected, has quietly taken a step in that direction with its Facebook Flyers ads (these are sidebar advertising widgets that Facebook still controls, as opposed to the majority of ad inventory on Facebook that falls under its deal with Microsoft). In terms of revenues, these Flyers probably don’t amount to much yet, but this is one Faecbook experiment worth keeping an eye on.

As first reported on AllFacebook, the Flyers let you target by country, city, gender, age range, political views, relationship status, education level, workplace affiliation, or any keyword in a person’s stated interests. It’s that last option that could be really powerful. For instance, simply putting in different keywords into the Facebook Flyers ad-targeting page reveals that of the 19,951,900 Facebook members in the U.S., 101,000 are into rock climbing, 411,000 are into cooking, and 706,160 people are into traveling. Such targeting could theoretically allow advertisers to reach exactly the people they want, instead of the scatter-shot approach favored today. If you are a wedding planner in Salem, OR, for instance, there are 100 women on Facebook between 20 and 40 who live in Salem and are engaged. That’s pretty deep targeting. MySpace is also moving in this direction, allowing advertising by interest categories and sub-categories.

Update: Apparently, this sort of demographic ad-targeting can be done by Facebook app developers as well. I just got off the phone with RockYou CEO Lance Tokuda and asked him if he could do the same thing on his Facebook ad network. “That is open to us,” he confirmed. “At some point we will be targeting this way when more sophisticated brand advertisers enter the field.” In contrast, most advertisers on Facebook today are just looking for raw numbers. 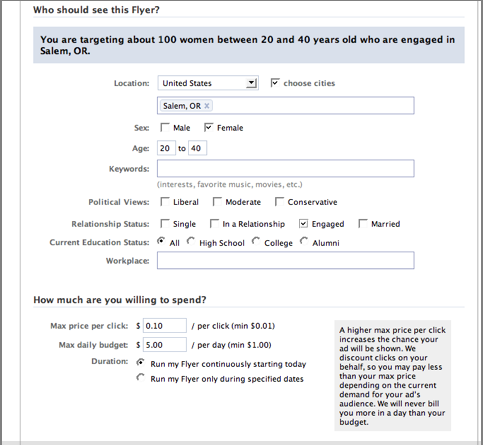