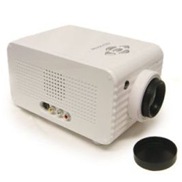 If you bought a Wii for its mind-blowing graphics, then you’ll want to stay away from this. Also, you should have bought a PS3 or an Xbox 360.

However, if you bought a Wii for FUN (!!!), then you might be interested in this $180 portable projector that ships with a Wii-specific AV cable (but supports standard cables as well).

It’s certainly nothing to write home about from a resolution standpoint — which is set at a very peculiar 962 x 240 pixels — but it can project up to 80 inches in size and features integrated speakers and a remote control (batteries not included). The speakers are a paltry 2-watts and the contrast ratio is a mere 200:1, so you’ll need a pretty dark room.