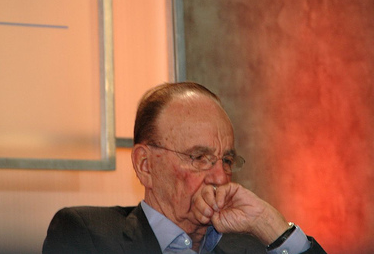 On Wednesday night at the Web 2.0 Summit, when Rupert Murdoch and Chris DeWolfe were on stage announcing that MySpace is going to open up its innards to developers and try to seriously compete plataforma-a-plataforma with Facebook, you’d think there would have been cheers from the programmers audience. And there were.

Except there was at least one, very loud, very forceful attendee who stood up and demanded more. It was Marc Canter, the CEO of Broadband Mechanics, who seems to be a fixture in the audience at every major tech conference I go to these days, always throwing bombs at the official panelists. Canter asked Murdoch and DeWolfe (as he had asked Facebook CEO Mark Zuckerberg earlier in the day) whether they would agree to create not just one-way APIs for developers to create apps inside MySpace, but two-way APIs so that they (and MySpace members themselves) could take those friend lists to create social applications outside of MySpace. He was saying, in effect, “Thanks for letting us in. Now tear down this (other) wall!”

At first blush, it sounds like something that will never happen. Social networks like MySpace and Facebook are happy to let other developers make their platforms better by creating apps for inside their Websites. But their customer lock-in is the fact that only they understand the connections between you and everyone on your friend list. Why would they give away the one thing that gives them competitive advantage and creates compounding network effects? This is the big knock against Facebook. It’s a black hole. Everything can go in, but nothing can come out. (It won’t even forward e-mails—you have to login just to read messages from other Facebook members).

But creating a two-way API is probably one of the smartest things MySpace can do right now. Instead of merely being reactive to Facebook, it could trump it by being even more open. In terms of attracting outside developers, the two big honey pots are big audiences and open platforms. If the Web is the platform, then any barriers to moving data in or out of a Website (or Web-based application) will one day become a barrier to growth rather than a barrier to entry.

Already, smaller, more forward-thinking startups like Twitter and Twine are embracing two-way APIs where the data you put into the service can be freely taken out. Six Apart just announced its Relationship Update Stream project, aimed at making it easy for Websites to let you take your friends with you. Google plans on taking this approach with its social network and other services. And speaking to folks from MySpace in the hallways at the conference here, I was assured that when it does open up its platform it will be a two-way street. At least, that’s MySpace’s intention. I got the feeling, though, that they have not yet worked out the details of how exactly they will do that. We’ll find out once the API’s finally come out. But this wall is going to come down one way or another.