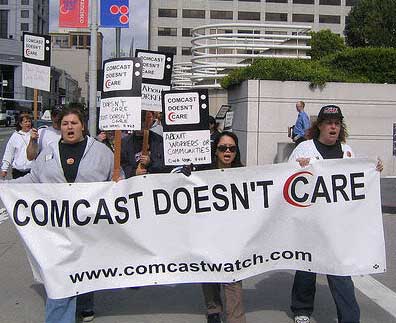 The AP has confirmed what we already knew: Comcast uses traffic shaping to slow down your Internet connection. Thanks, Comcast!

Yup, the AP ran a bunch of tests nationwide to determine if user complaints (like mine, but directed at Time Warner) were valid, or just a bunch of nerds complaining for the sake of it. Like I and many others have pointed out, the AP discovered that downloading files isn’t a problem, but uploading is, rendering things like BitTorrent all but useless. I really hope Comcast et al. don’t try to hind behind the ol’ “but BT is used for piracy” song and dance. There’s plenty of legitimate uses for BY, like downloading WoW patches.

Does Comcast have a right to manage its network? Sure, absolutely. But who’s to say what other programs and/or protocols Comcast will have a problem with next? Maybe one day it’ll turn around and decide that Skype isn’t “appropriate” for its network, or that AIM propogates too many viruses for it to be considered “safe”?

Thankfully the story is on Drudge right now in bold red text. Maybe now his bombastic headline will get non techies talking.