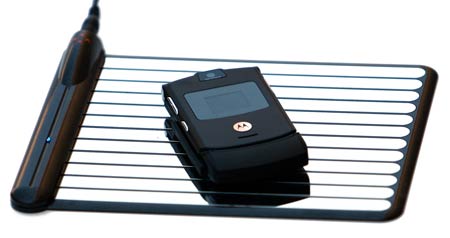 Nearly a year after I first reported on WildCharge, the induction based charging device, we receive word that a version of the product is now available for purchase. Using a charging pad and an induction strip that is placed on the device to be charged, WildCharge revives devices seamlessly, thus avoiding the cumbersome dilemma of having to plug in a cord.

I know this glimpse of that this glimpse of the future sounds like something torn from the pages of a smutty Sci-Fi magazine, but it’s true, and it can be yours today for around $50. That is, of course, if you’re still using a RAZR, which I’m guessing at least a few people are, since there were like 13 billion sold.

The problem, as I see it, is that the demographic of people who would be using WildCharge have surely moved on to more sophisticated phones (like the KRZR). I like the idea WildCharge, but I question your implementation. Get that iPod adapted out stat and then we’ll talk (me on my demon iPhone and you on your RAZR).