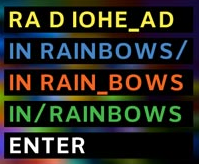 There’s been a lot of speculation over the future of the music industry and the conversation has begun to shift from “Can they sell DRMed music” to “Can they sell music at all”. Last week Radiohead ran one of the biggest tests of legally distributed free music by letting users name their price for “In Rainbows”, their latest album.

However, free doesn’t seem cheap enough. Despite the potentially free download, over 240,000 users got the album from peer to peer BitTorrent networks on the first day of release, according to Forbes. Since then, the album was downloaded about 100,000 more times each day, totaling more than 500,000. By comparison, Radiohead pushed 1.2 million sales of the album through their site, including pre-orders. File sharing networks are expected to surpass legal downloads in the coming days.

While the numbers may seem drastic, it’s really more a tale of how late to the game the music industry has been. Piracy networks have been growing over the past couple of years, despite the industry’s declared “war” on illegal file sharing. The networks have grown into easy-to-use distribution methods for digital music — even easier than what Radiohead offered. Users could easily grab “In Rainbows” while downloading music from other artists. Radiohead couldn’t be as compelling by only offering their own music and requiring users to take the time to set up an account.

But Radiohead doesn’t have that much to be sad about. The band gets to keep all the proceeds of their digital experiment and has distributed about six times more albums than their last release, which sold 300,000. That seemed to be enough to get EMI thinking harder about changing. Forbes obtained a email form EMI’s chairman saying “The industry, rather than embracing digitalization and the opportunities it brings for promotion of product and distribution through multiple channels, has stuck its head in the sand. Radiohead’s actions are a wake-up call which we should all welcome and respond to with creativity and energy.” So it seems there’s still hope yet that those legal war chests will be put to use on some innovations.