Let’s say you want to plan a party or some other get together. You have no shortage of options as to how you can get the word out to your guests. Your most reliable solution is probably just to spam your friends via email.

But if you want to create a standing destination for your guests to get more involved with the event ahead of time, you’ll need to set up an website-based invitation. As a pre-2005 college graduate, you’d probably use Evite. Otherwise, you might be more drawn to Facebook’s own event application.

Or, starting Thursday, you might opt to use MadeIt, a new invitation service/social network. The service, which on paper resembles Socializr, aims to eat away at the large market share of Evite, whose 6.7 million unique visitors per month (according to Comscore) consist largely of mid-30 year old females.

MadeIt takes on Evite by providing more customizable invitations and a social network within which guests can interact before and after events take place. 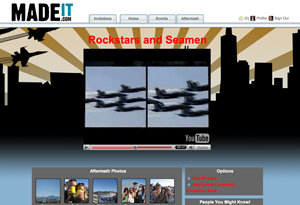 Invitations feature a custom background, an embedded video clip, general information, photos, a guest discussion area (with threaded comments), and RSVP options. Notably, MadeIt lets guests embed whatever objects they want into their discussion comments, so they can contribute images, videos, etc. just like in MySpace (in fact, the entire site seems aesthetically as though it will appeal to the MySpace crowd). Event planners can create their invites from scratch or choose from a variety of user-submitted templates.

More importantly, an event persists on MadeIt even after it transpires. The invitation turns into a page dubbed the “aftermath” where guests can add and comment on photos and videos from the event, friend each other, and check out each others’ profiles. Due to the ability of guests to connect with each other after events, MadeIt bills itself as a friends discovery system, unlike a traditional social network where you mostly interact with people you already know.

MadeIt’s integration of social networking does make it a more compelling option than Evite. However, I wonder whether MadeIt has made it too late to the party. As things stand, it (admittedly) has the greatest chance of capturing Evite users who are in their mid-20s to early-30s…which is all fine and good, but that demographic may be all the company can hope for.

Many users more towards Evite’s median age of 37 will not be inclined to switch over despite MadeIt’s advantages simply because they won’t demand its extra features strongly enough. And crowds younger than, say, 25 years old will increasingly choose to use Facebook, which itself serves as a massive “aftermath” area wherein people can tag each other in party photos and leave notes for each other about how wild the weekend was. As more and more people get sucked into the Facebook ecosphere, fewer and fewer of them will pick social services that exist outside of the network where all of their friends already reside. Of course, this could all change if “open” social networking becomes a reality, but I’m not going to hold my breath.

For all its competition, MadeIt provides a pretty solid service. I’ll be looking forward to seeing how their mobile invitation system, which will be deployed over the next few months, helps to differentiate themselves even more.

MadeIt has been under development for seven months and will, naturally, debut with a party (check out the invitation here). We’ve embedded the company’s promotional video below.