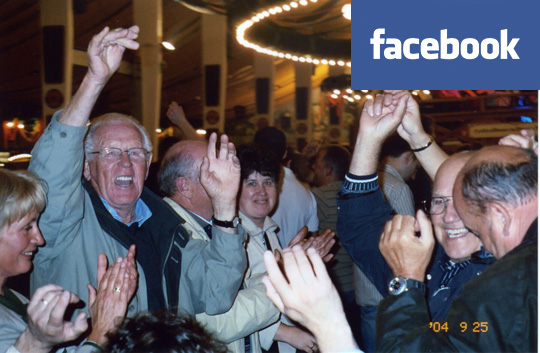 Now that old people have discovered Facebook, will The Kids still like it? An important question to be sure, especially now that companies like Microsoft are prepared to throw $lots Zuckerberg’s way for that hoard of information. What was once the exclusive domain of college kids poking each other back and forth has seen an uptick in… how shall I put this… old and decidedly boring adults. You know, folks with mortgages and two-car garages, with kids at day care and a husband/wife toiling at the office 12 hours a day. Dullards.

Do we, young people with no real skills or passions or responsibilities, want to be associated with those grown-ups? I don’t know—I don’t—but the Times went around and bothered college kids and their graying “friends,” trying to get a sense for what’s going on.

Fact: Facebook’s 25-years-old-and-over crowd has risen 40 percent, to around 40 million people. Even so, it doesn’t appear that the younger people on the Web site even give a damn. The 19-year-old guy will still cruise the site for the hot chick from the class “From Plato to Pluto” and the 38-year-old teacher will still use the site to organize class discussions and tell their friends (and “friends”) that their young child won the spelling bee, or something equally annoying.

Essentially, the generation gap will be that—a gap that few will cross and few will care to cross.

A Facebook vice president of Something Important told the Times that any “hey, beat it, people we don’t know!” reaction from the younger population will be short lived, if it ever materializes at all. Remember, Facebook was originally a Harvard-only site, and those kids got over the invasion of those dummies from Yale joining.

So to sum up: kids won’t leave Facebook because of the influx of elderly users, but because they just won’t give a damn; they won’t even notice.

Now I’m off to watch Rugby highlights. Enjoy the remainder of your weekend.

73 and Loaded With Friends on Facebook [New York Times]