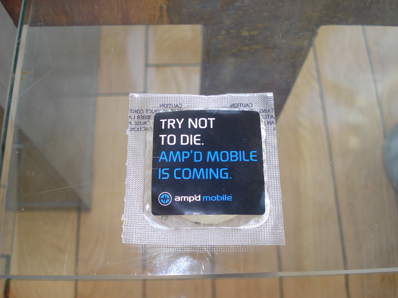 This is a New York real-estate story and one of marketing excess. It’s about Amp’d Mobile, the too-hip-for-its-own-good virtual mobile carrier that filed for bankruptcy last June after burning through $360 million in capital. A lot of that money was spent on things like MTV ads to attract 175,000 young, urban customers. The problem was that nearly half of them turned out to be unable to pay their bills.

Today, a company called VoodooVox, which I wrote about last week, occupies Amp’d Mobile’s former posh offices on Union Square in Manhattan, complete with a massive terrace overlooking the city. VoodooVox CEO Scott Hamilton was able to acquire the space and it’s custom-built contents “by feeding on the corpse of Amp’d,” as he so delicately puts it. For $16,000 at bankruptcy court, he was able to to get a couple hundred thousand dollars worth (his estimate) of furniture and other surplus.

As Hamilton was cleaning out the desks and filing cabinets, he came across some of those excesses in the form of marketing schwag—like condoms stamped with the unfortunate tagline, “Try not to die.” Little did the Amp’d marketing genius who came up with that line know that the expiration dates on the condoms would outlast the company.

Hamilton also found a closet full of Amp’d fleece jackets. Maybe he should send those to all the investors who pumped money into Amp’d and themselves got fleeced in the process.