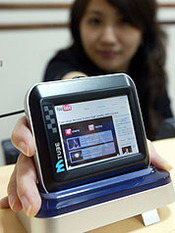 I suppose ultra portable devices are not a dying fad just because I don’t use one. This here is the VIA-based MTube running Linux. The tiny titan touts a 2.8-inch VGA touchscreen with a 1GHz VIA CPU with 8GB of storage and a four-hour battery life. The WiMAX enabled MTube weighs a mere 150g and measures in at 8.5×8.5x2cm. But don’t expect this to hit the production line anytime soon, we may not see it until 2009 if at all.