Shelby Bonnie left the company he co-founded with Halsey Minor, CNET, just about one year ago. This morning he launches his next startup, PoliticalBase.

The site, which focuses on local, state and national elections and other political matters, is timed perfectly to take advantage of the 2008 presidential elections and the estimated $4.5 billion that will be spent on advertising to promote candidates and issues.

PoliticalBase is a structured Wiki that encourages research and debate. Users can edit most of the text but can’t change the underlying database structure. That allows the site to slice and dice data for comparison purposes (something that can’t be done with the free-for-all Wikipedia) but still gives the site’s community the ability to create and edit content.

The site is broken down into interconnected categories, including money, people, issues, elections, etc. Clicking on, say Rudy Giuliani shows information on that presidential candidate, including the amount of money raised to date, his religion and party affiliation and biographical information. At the bottom of the page his position on key issues is also shown (for fun, register for the site and click that you do not support him – see how his picture changes). 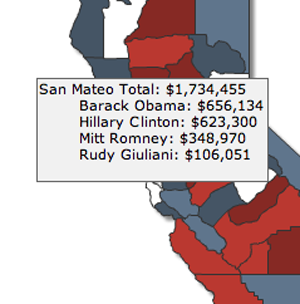 The Money area of the site is fascinating. PoliticalBase has collected public information on presidential donations made by individuals. Click on any state and then click on a county and see information on each individual contribution, down to the last dollar. Want to skip to the good stuff? Go to the celebrity area and see that, for example, Marc Andreessen gave $2,300 to the Barack Obama campaign.

Other areas of the site have hidden gems as well, such as integration of relevant YouTube videos into the pages. And as PoliticalBase attracts more users and gets more data, they’ll be able to do some interesting analysis and election predictions.