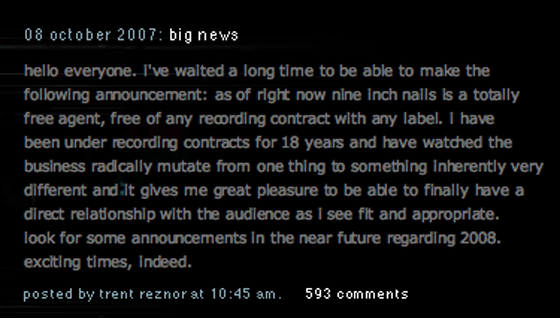 Highly popular Industrial Rock Band Nine Inch Nails have announced that as of today they are free agents, and will not be using the services of a record company in the future.

Nine Inch Nail’s Trent Reznor wrote on the NIN site that the writing is on the wall for the traditional music distribution model, saying that the music business has radically mutated from one thing to something inherently very different today and that “it gives me great pleasure to be able to finally have a direct relationship with the audience as i see fit and appropriate.”

It’s expected that Nine Inch Nails next album will follow on from Radiohead’s Rainbows and be released directly to the public.

I think Gizmodo hits it right on the head when they write:

If two of the biggest acts in the industry can see the digital writing on the wall and totally embrace it—that the old way of doing business is broken—why can’t the labels? What Radiohead and NIN are showing is that the business model “of the future” feared by entrenched interests isn’t arriving some time in the horizon. It’s touching down now.