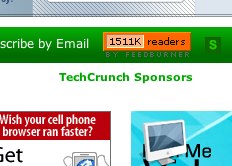 1,511,000: the number of subscribed RSS readers of TechCrunch, according to the Feedburner Widget as I type this post. Given the number is up significantly from the 600,000 odd subscribers we had yesterday, I’m calling it a Feedburner bug.

Feedburner has had a long history of doing strange things with the subscriber counter, and TechCrunch’s readership (if the counter is to be believed) can fluctuate by over 50,000 readers from day to day, but I’ve never seen a 900,000 jump.

If you’ve just gained (or even lost) an extra hundred thousand readers, or perhaps even a million, let us know in the comments.

Update (MA): Occam’s Razor; Feedburner’s CEO Dick Costolo has confirmed it was a bug and that it will be fixed shortly.