In 1995 eBay sold a laser pointer online and kicked off the online marketplace for selling physical goods. As networks improved in the intervening years, the idea of what can be bought and sold online has grown to include digital goods, such as music, e-books, and videos as well. Zipidee wants to be a market for those digital goods, and is expected to launch some time in the next week.

It’s by no means a new concept, there are several sites out there that trade in digital bits: Payloadz, Tradebits, e-Junkie, Lulu, Edgeio, and more. eBay already sells digital goods, with delivery often handled through these third party sites. iTunes can also sell your content, but requires an approved label if you want to get paid.

However, Zipidee will offer considerably more control over pricing and distribution than these other sites. Merchants on Zipidee will be able to create their own virtual store where they can list their digital wares for sale on the site directly or across Zipidee’s website widgets. It’s an ideal setup for anyone selling an instructional video series or their own audiobook. 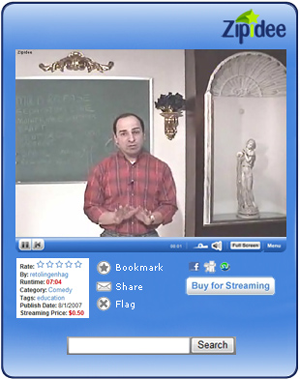 Audio and video can be uploaded to the site to be rented or bought at whatever price the creator wishes and consumed via downloads or streams. Other services often only allow downloads.

You will be able to track the sale of their good in real time and adjust the price accordingly using their analytics dashboard. Creators will also have the option of protecting their product with Zipidee’s own DRM system. DRMed goods come with a license to play the media through their web or downloadable player on any computer with your Zipidee credentials.

Zipidee will make money through a $1 listing fee (waived to start) and roughly 80/20 split of the purchase price, like Lulu (Zipidee takes a smaller cut for higher priced goods).

To start, Zipidee will focus on digitizing the kind of media now sold at conferences and trade shows as DVDs or Books. For launch, they’re digitizing materials from a series of consultants and speakers such as DreamUniversity and MightyVentures who currently sell millions of dollars in physical merchandise directly to their customers.

Yet, there’s still a big question over whether and where people will buy “long-tail” digital content. Zipidee is fighting the trend toward free digital content (wikipedia, 5 min) and people are reluctant enough to even pay for big-media’s content (most songs on iPods do not come from iTunes). There is also a question as to whether the best way to sell this content is horizontally in a single marketplace, or vertically by topic. There are a great number of digital content verticals out there already that could serve as points of sale for independently produced content (DocStoc, Scribd, Amie Street, 5 Min, Snocap). We’ll have to see how it all pans out when Zipidee launches. 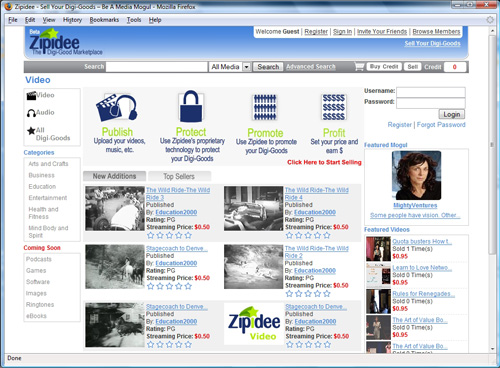