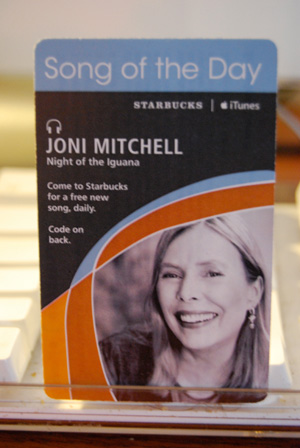 Who wants to win today’s free Starbucks-iTunes song, “Night of the Iguana” by Joni Mitchell? It’ll save you a trip to your local Starbucks and the $14.80 it costs for a small coffee.

Very easy—first person to e-mail me at nicholas at crunchgear dot com (I don’t want spam lol!) gets the secret download code.

I go to Starbucks pretty much every day around 7 or 8 a.m., so if this contest jumps off I may well do it every day.

UPDATE OK, we have a winner and it’s Lindsey C. Hope she enjoys whatever it is she won. (I think Starbucks should give be giving away Van Halen amd Sleater-Kinney, but I’m a dope so who cares.) I forgot to mention that the song give-away is for U.S. residents only, so I inadvertently screwed over one guy. And if the songs are lame, so be it. I’d rather give away something I wouldn’t use than throw it away. Provided I go to Starbucks in the mornings, expect a new song every day during the week.