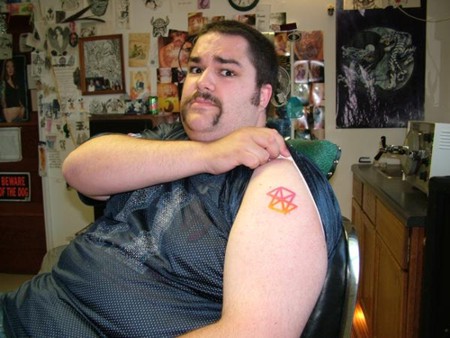 We like the Zune series of music players. We really do. We’d like them more if they’d work on our Macs, but that’s another story. We don’t, though, like them as much as Steve Smith of Sioux City, Iowa. Steve has not one, not two, but three Zune tattoos on his body. And, now that the new Zunes are out, he’s planning on more.

Our editors wanted me to speak with Steve about his fetish love for Zune, but I was too frightened. So I dug up this post from earlier today by Laptop magazine, who talked to this scary individual so that I wouldn’t have to. Thanks for taking one for the team, Laptop.

In the post, Steve talks about how much he likes the new Zunes, and his wishes that Big Redmond would send him a new 80GB model on the Z2 for his loyalty. C’mon, Cesar, you guys can spare one for this guy, right? Just don’t make me deliver it.