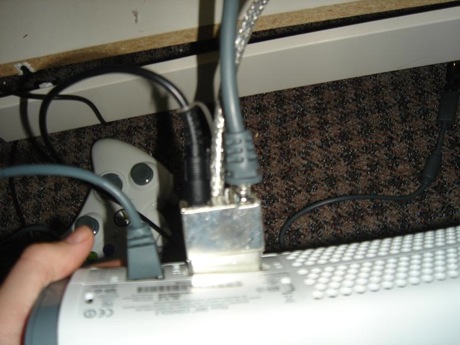 Anything proprietary burns my biscuits. Lately it’s been Samsung phones and the multiple cables I need for charging and headsets and whatever else. The Xbox 360 and its proprietary business is a crock as well, but it’s the best console out there and M$ is losing money over every console sold. You can’t really blame them for trying to make a few bucks here and there. Don’t get me wrong though, it’s their problem not ours. Luckily we have the Internet and DIYers to make life a little more easy and cheaper. If you’re the tech savvy type then you know HDMI is the way to go, but you can’t have both HDMI and the component A/V cables plugged in at the same time on the 360 Premium. So how do you get HDMI video and digital optical audio?

It’s rather simple. Purchase a cheap HDMI cable, around $10. Then strip the plastic casing from the standard A/V cable and voila, HDMI video and digital optical audio for less than $10.