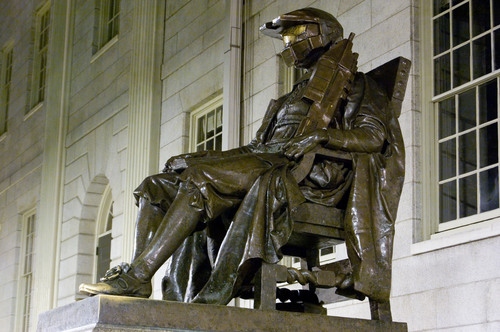 With all the speculation going around since yesterday over an alleged split between Bungie and Microsoft, you have wonder who would release the next Halo game. I know the Trilogy is over. Duh. But Microsoft knows how big a cash cow this title has become so what studio would pick up the slack if Bungie refuses to work on it?

CK, a former industry insider, had this to say.

I would say the production team that made Dragon Wars should make Halo 4 because whatever they touch turns to gold. Maybe Epic, but there won’t be a Halo 4. The trilogy is over, jackass.

From the people who made “Halo 1-3.” Even if Microsoft-owned Bungie somehow wriggles free of Bill Gates’ company, they would likely get first dibs on Master Chief’s next major adventure. Which isn’t to say Microsoft wouldn’t be looking to other developers to make “Halo 3.5″ and “Halo 4.5,” because the company would certainly love to have the series coming out at least every other year. Bungie just doesn’t work at that pace. Still, why would they not want these guys working on it?

Failing that, he thinks the empire will shift to Ensemble Studios. It trickles down to Rare, Epic and then Team Ninja. There are more, but it’s not worth going into.

Hey, MTV, why don’t you start playing music videos again instead of shitty teenybopper TV shows. Don’t tell me to go to MTV2, either. I want my MTV back!

If It Couldn’t Be Bungie, Then Who Would Make “Halo 4″? [MTV Multiplayer]