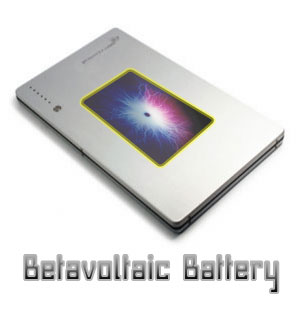 Fed up with shoddy battery life on your laptop? You’d be lying to me if you said otherwise. I’m not so sure how legitimate this is, but the US Air Force Research Laboratory has had a hand in the creation of a continuous battery that lasts for 30 years without a single recharge. The betavoltaic power cells are assembled from semiconductors and use radioisotopes as the energy source. Yeah because I want radioisotopes near my crotch. These super fantastic batteries are set to reach store shelves in 2 to 3 years. Pretty sure this is a hoax since I can’t seem to find any of this info on the AFRL site.

Although betavoltaic batteries sound Nuclear they’re not, they’re neither use fission/fusion or chemical processes to produce energy and so (do not produce any radioactive or hazardous waste). Betavoltaics generate power when an electron strikes a particular interface between two layers of material. The Process uses beta electron emissions that occur when a neutron decays into a proton which causes a forward bias in the semiconductor. This makes the betavoltaic cell a forward bias diode of sorts, similar in some respects to a photovoltaic (solar) cell. Electrons scatter out of their normal orbits in the semiconductor and into the circuit creating a usable electric current.

The profile of the batteries can be quite small and thin, a porous silicon material is used to collect the hydrogen isotope tritium which is generated in the process. The reaction is non-thermal which means laptops and other small devices like mobile phones will run much cooler than with traditional lithium-ion power batteries. The reason the battery lasts so long is that neutron beta-decay into protons is the world’s most concentrated source of electricity, truly demonstrating Einstein’s theory E=MC2.

The best part about these cells are when they eventually run out of power they are totally inert and non-toxic, so environmentalists need not fear these high tech scientific wonder batteries.

UPDATE – As Joel points out and as I should have told Peter, this is bullshit piled on top of a pile of horseshit.