Pump Audio relaunched today as Soundtrack, following its $42 million purchase by Getty Images last June. Pump Audio’s catalog of music from 20,000 independent artists can be licensed for the Web, TV, or radio. Customers range from major TV shows like The Colbert Report to advertising agencies and podcasters.

You search online through a pretty slick interface that lets you quickly narrow your music search by type (lyric or instrumental), genre (rock, classical, blues, electronic), mood (laid back/groovy, ambient/spacious, aggressive/edgy), and speed (slow, medium, fast). Once you find a song and listen to a stream online, you can license it for a variety of purposes. Using a song in a Web video might cost $35 plus five percent of any associated ad revenues, while using it for a cable TV show will cost you $450. (A license for a regional TV ad runs as high as $2,100). In comparison, licensing a song from a major-label artist can be orders of magnitude more expensive.

Soundtrack fits in with Getty’s strategic push into digital licensing. In addition to its own stock photography used by major newspapers, magazines, and advertisers, Getty also owns the largest microstock photo service, iStockPhoto. Adding music to the mix makes sense. Now, Getty can use its heft to negotiate with the major labels, and get them to license their songs for more reasonable rates. Musicians and the major labels should think of music licensing more as a volume business than a one-off lottery. One of the biggest barriers to music licensing in the past was simply the search costs. You had to listen to CDs, track down the music label, and hammer out a deal. Now, services like Soundtrack and YouLicense reduce the search costs to practically nothing, and automate the contractual part. With the ease of finding and licensing songs on the Web, legal music licensing could expand greatly. As more and more serious Web video shows and podcasts get produced, they are going to need some good back beats to keep people watching. 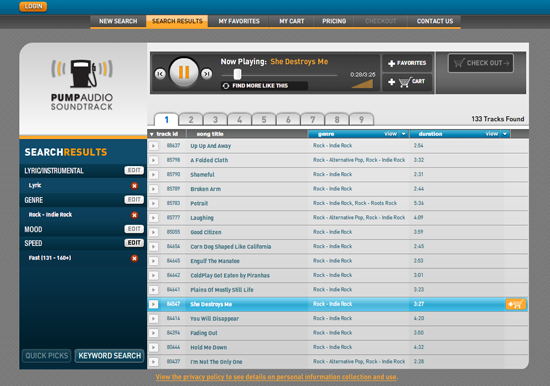