The only proven way to make money off of widgets is by turning them into ads. There’s Google’s Gadget Ads (AdSense in a widget, basically), AuctionAds (one of our sponsors), boobox, and even ThisNext (which just hired IAC exec Scott Murrow as president, BTW). Now Seattle-based Mpire has launched a widget ad network called WidgetBucks (or, rather, relaunched an earlier program).

Bloggers can customize what kinds of consumer items they want to appear in the widget (books, movies, computers, musical instruments), then they grab some code and put it on their blog. Or they can let Mpire serve up contextually relevant ads based on the topics they write about. WidgetBucks scans your site and tries to match ads to the keywords it finds. The widgets tap into merchandise from 30,000 retailers, including Amazon, Shopping.com, Target, Best Buy, Wal-Mart, and the Gap. WidgetBucks shares the cost-per-click revenue with bloggers, promising the equivalent of $3 to $6 CPMs (cost-per-thousand views). Mpire is also working with RockYou to create a Facebook app. Yeah, schlocking your Facebook page is going to make you real popular.

Here is what one of the widget ads look like: 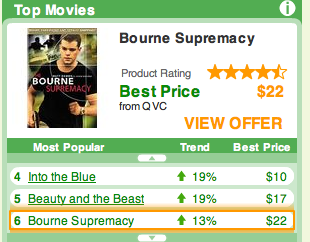