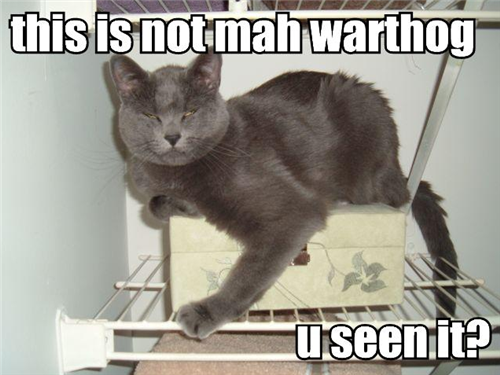 Hell hath frozen over. I love my Lolcats, but this is taking it way too far. An actual press release after the jump.

New site brings best of both worlds: Lolcats and the Halo universe

EARTH, OCTOBER 1, 2007– What happens when two worlds collide? Aliens versus humans-the classic struggle of good and evil. The same battle is being waged on Halo 3 for the XBOX 360, and starting today-on the internet too! Introducing Halolcats.com, a new site devoted to combining the Halo universe with humorous, and lovable cats. We’ve captured both Halo-themed lolcat pictures, and pictures of cats interacting with the replica Master Chief helmet that ships with the Legendary Edition of Halo 3. It’s a match made in space!

Each day users will be treated to a new slew of Halolcat pictures, and they can even submit their own. Pictures can be rated and commented on by site readers, and we keep track of the best of the best in a “Top Rated” section. Like the medals earned for certain achievements in Halo multiplayer matches, Halolcats utilizes medals for each picture, bringing focus and editorial on what makes them funny.

We hope to harness the energy and enthusiasm of Halo players across the globe who are willing to take a camera, a helmet, and a cat-and make history with us.

About Lolcats
The origin of lolcats is somewhat unknown, but sometime around the early 1990s, cats were literally exploding onto the Internet. Lolcats are a combination of a cat photo, and wildly inaccurate, or otherwise humorous statements written on top.The result is a massively popular trend of sites such as icanhascheezburger.com, which rakes in thousands of page views every day.

About Halolcats
Halolcats was founded by two gamers and lolcat fanatics who took one look at the Master Chief replica helmet and thought it was the perfect opportunity to make something legendary of their own.