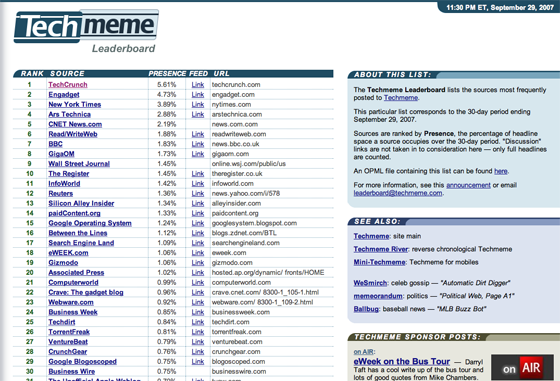 Update: The leaderboard has launched. See it here.

Blog search engine Technorati’s founding CEO is gone, its traffic party has ended and its core search functionality is under long term fire from competitors like Google Blog Search, Ask.com and Sphere (among others). Constant strategic shifts haven’t helped much either.

But Technorati still has one stronghold left – it controls the definitive, editorially unbiased list of top blogs. The list is based on unique incoming blog links over the previous six months. More links = a higher position on the list. To get a top 100 spot, a blog currently needs about 3,700 unique links.

But links from other blogs may no longer be the best indicator of the popularity of a blog, particularly today when blog links can be obtained by simply opening up the checkbook and paying. Also, Technorati clearly counts spam and other blogs, which can have a significant impact on rankings.

That’s a statement that will be hotly debated. But tomorrow bloggers will have a new top 100 list to aim for – the Techmeme Leaderboard.

The list will be created based on the blogs that created the most headlines on Techmeme over the previous thirty days (so it will change frequently).

TechMeme has become the definitive site for tech blogging news, and its sister sites Memeorandum (political news), WeSmirch (celebrity gossip) and BallBug (baseball news) hold a similar esteem in their markets. It’s about time founder Gabe Rivera started to release some of the great statistical data he’s been collecting since launching the original site in 2005.

To be exact, top blogs will be ranked on presence – “the percentage of headline space a source occupies over the 30-day period.” Discussion links are not taken into consideration – only full headlines are counted.

I think this is a much better way of ranking the very top blogs than the Technorati approach. Technorati has deep flaws, for reasons stated above. Techmeme, by contrast, has zero spam and tends to mirror what the tech blogosphere is writing about perfectly.

I am somewhat biased, however, as TechCrunch is currently in the no. 1 spot, whereas Technorati only ranks it no. 4. Also, our sister site CrunchGear is ranked no. 28 on the Techmeme Leaderboard list.

Look for this sometime tomorrow, and hopefully we’ll see leaderboards for the other Techmeme sites soon, too. Until then, check out the screen shot above, which only includes the top 30 blogs. Click for a larger view.

So what do you think is the better way of ranking blogs – Technorati or Techmeme’s approach? Or do you have a better idea? (don’t tell us, just build it)

Update: Dave Winer (his Scripting News is no. 36 on the list), posts the entire current top 100 list.

Update 2: Ben Metcalfe points out that a third of the sources on the list are not blogs, they’re mainstream news sites. He makes a good point wrt to how much of an apples-to-apples comparison this is with Technorati. What I think is also interesting, though, is that perhaps its time blogs and mainstream news sources go head to head on lists like these. As a group we are continuing to kick them in the pants.