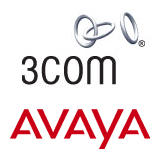 Two big private equity deals today. Shareholders finally approved the $8.2 billion buyout of Avaya by Silver Lake Partners and the Texas Pacific Group (not bad for an IP phone company that once was part of Lucent). And 3Com, the perpetually money-losing maker of computer networking equipment and competitor of Cisco Systems, has agreed to be acquired by Bain Capital and Chinese networking company Huawei Technologies for $5.30 per share in cash, or $2.2 billion total. For 3Com, that’s 1.7 times last year’s revenues, and for Avaya it is 1.6 times.

The price for 3Com is a 44% premium to Thursday’s closing share price of $3.68. Huawei Technologies will gain a minority stake in 3Com as part of the deal.

This 3Com deal marks the ascendancy of China in the networking equipment market, partially because networking is still very much a growth market in China and partially because Ethernet switches and the like have become such commodities that only the Chinese can compete. The deal also marks the latest of a string of low-margin tech giants getting bought out with private equity money going all the way back to Silver Lake’s acquisition of Seagate in 2000. But like all private equity deals, those too were fueled by low interest rates. The Avaya deal was brokered earlier this year, before the recent subprime credit crisis threatened to put a damper on the buyout trend. How many more of these do the markets have an appetite for?