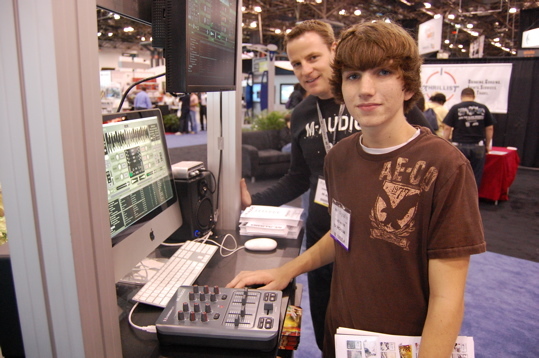 Today marked the start of the Digital Life convention in NYC.

Once a year, us journalists are forced to trek all the way over to 12th Avenue to the Jacob Javits Center so we can cover products we’ve known about for months. It’s not exactly fun for us, but for the general public, it’s the experience of a lifetime.

I arrived around 11:30am, got my press badge and headed inside. Lucky for me, it was the press preview so there weren’t a million kids running around going “OH SHIT! GODDAMN IT’S HALO 3 YO!” After about 45 minutes of cruising around the floor, I realized that this year’s show didn’t have nearly as many companies as it used to. With plenty of time to kill, I met up with Nicholas and we went up to the press room to chat for a bit and grab a drink.

As we were talking, I mentioned that earlier, I had planned on just grabbing some random kid and getting him into the show early/for free by saying he was my photographer. We laughed a little then looked at each other knowing it was a damn good idea. I walked over to the press badge table and asked the gentleman if he could print me up a pass for my “photographer”. He kindly obliged and asked me what his name was. I replied “Uh, Cruce Wayne. Yeah. C-R-U-C-E, Cruce.”

So with badges in hand and being the rogue journalists we are, we went back downstairs and proceeded to comb a very long line for a lucky kid. Wayyyyy in the back of the convention center was a 15-year-old boy waiting in line by himself. We walked up and asked for his name. “Chris.”, the boy replied. I asked him if he wanted to skip the line and get a bunch of free stuff. Needless to say, he was down and after christening him “Cruce Wayne”, the three of us headed into Digital Life.

Editor’s Note:
Cruce Wayne comes from a time Nicholas was trying to type the words “Bruce Wayne”, the alter ego of Batman, when he slipped up and typed “Cruce” instead. All of us at CG pretty much died of laughter and proceeded to make fun of Nicholas and his shitty typing skills.