The global hip-hop community: twenty four million people between the ages of 19-34, from a range of nationalities, ethnic groups and religions. Their collective spending power is $500 billion annually in the U.S. alone. Naturally, there are lots of online properties dedicated to Hip Hop culture. And now they have a customizable Ajax home page, too.

New York based global Grind launches this morning with some serious backing, a venture round (size undisclosed) from Accel Partners and Russell Simmons.

The service is essentially the same as Pageflakes, Netvibes and other customizable Ajax home pages. 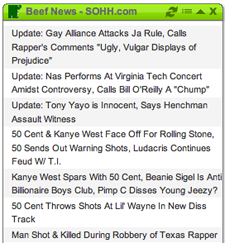 Users set initial interests (video, comedy, news, etc.) and get a set of pre-made modules. You can also add feed URLs directly, create multiple tabs, etc. All standard stuff, even if Global Grind has slightly edgier design than the others.

A lot of the pre-made content is directly related to Hip Hop, though, such as one that shows the most recent beefs between rap artists (just like blogger wars apparently, plus money, sex and guns – see image to right). Users can also make tabs public and share content.

The company was founded by Navarrow Wright, formerly the CTO of Black Entertainment Television. The company has twelve employees.

So…will it work or will it drown in the competition? Frankly, I’m in favor of any experiments which bring technology to people beyond the early adopter tech geek crowd. The Global Grind user base is already tech savvy, though, and aware of a lot of the new web products out there. That means they have to be cool and edgy enough to attract and keep users who wouldn’t think of using, say, Netvibes . Having Russel Simmons involved will certainly help in that area. We’ll check back in on them in six months or so and see how things are going. 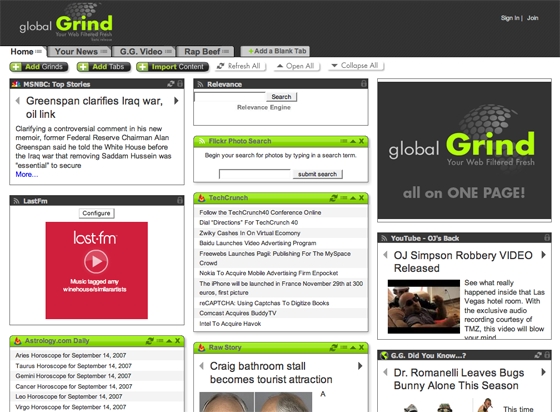