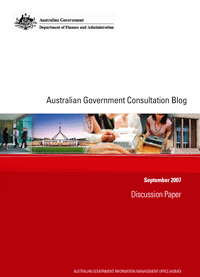 The Australian Government has released an official consultation (white) paper on whether it should launch a “consultation blog.”

According to the paper, the Special Minister of State the Hon. Gary Nairn states that the purpose of the paper is to discuss the provision of the consultation blog and “sets out to balance the opportunities provided by the new online environment against the challenges and very real threats emerging to the identity and privacy of individuals.” The blog itself “is
envisaged as a website that lists consultations and allows people to post responses, comments and feedback against each consultation.”

Now whilst it’s great to see a sovereign nation officially consider a blogging strategy, I want what ever it is the soon-to-be former Government is smoking; the irony of launching a consultation paper on a consultation blog seems lost on them. Certainly deciding to run a blog based on a lengthy consultation process by itself seems to me to prove that they shouldn’t be blogging at all; after all, if the purpose of having a consultation blog is to gain feedback from the public, wouldn’t they just be better off launching the blog and taking feedback from the public via the blog rather than launching a consultation paper that probably cost six figures to come up with by a committee of high paid public servants who love nothing more than creating papers like this as a means to avoid real exposure to the will of the public? A little cynical perhaps, but reading a paper that describes blogs like 2002 called again can do that to you.

The PDF in all its glory can be found here.