The fourth-largest IT company in the world is about to get a whole lot bigger, especially here in the US. Here’s a look at what we can expect to see over the next year or so from Acer.

While a roughly 1% lead over Lenovo may not seem like much, Acer’s growth has been steadily increasing each year while Lenovo’s has remained relatively flat. 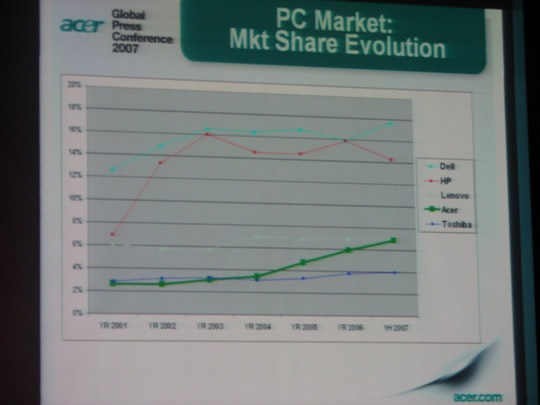 In the second quarter of 2007, Acer reported having the best growth in the industry while at the same time retaining a 7% profit margin. Since margins in the PC industry are always notoriously low, the ability to consistently show a profit has been possible thanks to Acer’s ability to reduce costs, sell more computers, and improve efficiency, according to president Gianfranco Lanci.

"Trading growth is extremely important in this industry. Let’s forget about a margin increase. So if margin can not increase, the only thing that we can think about in terms of improving our capability is to reduce costs. The only way is to improve our economies of scale and our efficiency."

Lanci also said that he thinks that Acer should be able to show 30% growth in 2007 while at the same time showing a stable profit.

John Dvorak ran a column recently where he said the following,

"This company, which could only be described as a monstrous multibillion-dollar international mom and pop store, just thrives on Sino-simplicity. That means one marketing strategy: ‘best price.’

The fact is Acer historically has failed miserably in the United States, largely because it is fickle and cheap.

It was fickle when it was headed by its famous founder, Stan Shih, as it was in and out of the U.S. market in earnest more often than Renault, Fiat and Peugeot combined.

Acer also is cheap and not willing to spend much on advertising or promotions, outside of occasional event marketing in the form of corporate celebrations.

A friend of mine who got sucked into the Acer fold, when he was part of the Texas Instruments laptop group bought by Acer years ago, said that the secret Acer motto was ‘Our products are not as good as the competition’s, but they are a lot cheaper!’

Acer took the TI line of often cutting-edge laptops and pretty much let them devolve into the same old, same old Acer stuff. The same can be expected to happen with Gateway and its subsidiary, eMachines.

Only recently has Acer fancied itself as a marketing company. But only with its sponsorship of the Ferrari racing team and a subsequent release of Ferrari-branded laptops and accessories has it shown any marketing chops, and those chops are still pretty feeble.

Sorry, but there is no way after all these years, with or without the new chief executive, that Acer can manage to keep Gateway and eMachines in play for long before doing something to kill the brands, and go back to just being Acer. This will result in another round of de-emphasizing the U.S. market. Here we go again."

I would argue that Acer’s mom and pop mentality and "best price" marketing strategy could be the best things it has going for it right now, especially if it can shed the "not as good but a lot cheaper" stigma. I see the Gateway acquisition as a step in the right direction and Lanci insisted that Acer wouldn’t kill off any of its newly-acquired brands.

So what to do with Gateway and Packard Bell?

Lanci’s basic position is that, due to the complexity of how the market is segmented nowadays, a simple one-for-all brand doesn’t work anymore. He also explains that just because Acer purchased Gateway and Packard Bell doesn’t mean that the three companies will be doing everything the Acer way.

"We think a multi-brand strategy is going to be one of the key winning elements for the future. If you take the PC market ten years ago in 1997, it was less than 100 million [units shipped] but, more importantly, segmentation was very simple — desktops for consumers, desktops for professionals, and notebooks. Consumer notebooks didn’t even really exist in ’97, it was mostly professional. It was very simple segmentation. So one major brand was good for everything, not any individual segment.

We believe that if you want to address all these segments and you want to address all these segments with the right positioning, you can only do it with your different brands. You can’t sell gaming PCs with the same brand that you sell professional PCs. You will confuse your customers; is it a professional company or is it a gaming company? We think that with the evolution of the market, we really need more than one brand.

We’ve already started to work on the integration. We launched a post-merger management program a few days ago and if you look at mergers and acquisitions from past experience, in most of the cases I think that apathy of such programs was very, very strong because the approach between big guys and small guys has always been that the big guy is trying to eat the small guy.

In my opinion, when you look at Acer, Gateway, and Packard Bell, there are strengths in all the three companies and we need to make sure that we can leverage the strength of all three companies. We need to share best practices. We have best practices in Acer but, for sure there are best practices within Gateway and Packard Bell. We can’t just say that what we’re doing in Acer is the most efficient and best just because we are the big one. There are probably good things they do in Gateway and good things they do in Packard Bell. We need to learn and make sure that we maintain good people and good talent in all the three companies. So I think we are taking a totally different approach with our integration plan."

Gateway’s business division wasn’t sold to Acer, it was sold to MPC, so Acer may very well shift more towards business while Gateway and Packard Bell will remain consumer brands. The eMachines brand, which Gateway purchased some years ago, will likely retain its inexpensive starter PC reputation here in the US, Gateway PCs will be seen more and more in retail stores, and I get the feeling that Packard Bell won’t be making a triumphant return to the US market anytime soon.

In a private interview with six American journalists last Friday, Lanci said that Acer was still considering how each of its brands (Gateway, eMachines, Packard Bell, Acer) would be positioned worldwide but that it’s unlikely that all four of them would exist all together in any given place. There would likely just be two or three in each market. The brands won’t co-mingle, either. You won’t see Acer or Packard Bell laptops on Gateway.com. In the US, Gateway might become Acer’s primary brand. "We are totally open," said Lanci.

Beyond traditional PCs and laptops

I asked Lanci about Acer’s plans to expand its consumer offerings in the US and, while the company expects to focus on the computer side of the business in the short term, there’s some talk of bringing Acer-brand LCD TVs and UMPCs stateside.

If I had to guess, I’d t
hink that we’d see TVs before anything else. The company’s monitors consistently target price-conscious consumers here and I think that if it could follow the same model with its LCD TVs, they’d sell pretty well. Lanci told me that he’d expect that TVs would be priced more in the middle than on the low end, though, so we’ll see what happens.

Acer isn’t planning on releasing a UMPC "until the technology is ready" mostly meaning that battery life isn’t yet sufficient for Acer to develop a UMPC and expect it to sell well. Lanci would like to see 7-8 hours of battery life. "You have three hours now, which is pointless. You might as well use a laptop." I’d guess that we might see an Acer UMPC by late next year, maybe even early 2009.

One thing’s for sure, Acer will NOT be developing mobile phones. I asked Lanci if the world can expect "The aPhone" and he amusingly answered, "No!! Big no."

I think that in the short term, we won’t see any sweeping changes here in the US. The biggest might be that Acer computers disappear from store shelves while Gateway computers become an even bigger presence. There will be a fair amount of behind-the-scenes stuff going on but I don’t think that consumers will be exposed to too much of it.

I got the feeling that Acer kind of has a "don’t rock the boat" mentality. Lanci was critical of how quickly (and unsuccessfully) HP tried to kill the Compaq brand and I don’t think he wants to make the same mistake. Even if he could get away with killing off Gateway and Packard Bell, I don’t think he would unless he had a very good reason. It wouldn’t be an ego play, though, in my opinion.

Acer seems like a decent enough company that, for the most part, wants to do what’s right. Sure, it’s got a bottom line to look after and stockholders to keep happy but that’s a necessary evil with any large company. The biggest thing that I took away from the conference was the feeling that, unlike a lot of other companies, Acer doesn’t have a "father knows best" attitude, especially as it pertains to this merger. If Lanci and company can follow through on the promise of sharing best practices and emphasizing the importance of retaining good talent, I think that everything else should quickly fall into place.