The popular daily videoblog Rocketboom is joining online video network blip.tv, which will now host all of Rocketboom‘s videos and sell ads for the show. Rocketboom joins a growing crowd of other top videoblogs that can be found on Blip.tv, including Wallstrip, TreeHugger TV, Alive in Baghdad, and Goodnight Burbank. As with most of those shows, the relationship between Rocketboom and blip.tv is not exclusive. For instance, Rocketboom will continue to sell ads on its own site. But the more top-quality shows that blip.tv can sell ads against, the stronger its position becomes in the embryonic world of Web-only video. 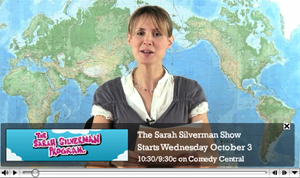 With its launch this morning on blip.tv, Rocketboom gains a new sponsor in Comedy Central’s The Sarah Silverman Program. And blip.tv is concurrently launching a new ad unit, an Flash-like overlay that can be seen on Quicktime downloads (the kind you get off iTunes). According to blip.tv CEO Mike Hudack, these ads will be viewable on iTunes even though Apple generally prefers the paid-download model to ads. Blip.tv has offered pre-roll and post-roll ads on video downloads for about a year, but this is the first time a mid-clip overlay is available. Overlays, which usually look like a banner that pop up during the video, are preferable because, Hudack tells TechCrunch “pre-rolls have the potential to turn off viewers and post-rolls don’t get watched.” Eventually, blip.tv will have the capability to track how many times each ad is viewed or clicked on as well. Up till now, such metrics have been more common for streaming videos than for downloads.