Rumors of a Google powered virtual world based on Google Earth surfaced in January; today there is word that Google may be testing their virtual world at Arizona State University (ASU).

According to Google Operating System, ASU students have the opportunity to test a new product “that will be publicly launched later this year” by “a major Internet company” that is related to social networking, 3D modeling and video games. The questionnaire attached to the application process asks would be testers if they have a Gmail account, and if not would they be willing to get one. The product’s name is shown as “My World.”

Google’s Sketchup service already provides the tech to do 3D modeling and could also be used to create avatars.

We know for certain now that Google has big plans for social networking, from SocialStream to Google’s planned November 5 launch of the mother of all open social networking platforms. Whether the planned service will be a true Second Life competitor is still to be seen, however I suspect that if Google is prepping a virtual world it will be closer to IBM’s Virtual World chat platform than Second Life. To deliver a full UGC world is a not an easy step where a basic 3D world which builds on Google Earth, SketchUp, and existing Google social networking platforms including Orkut would seem more likely. 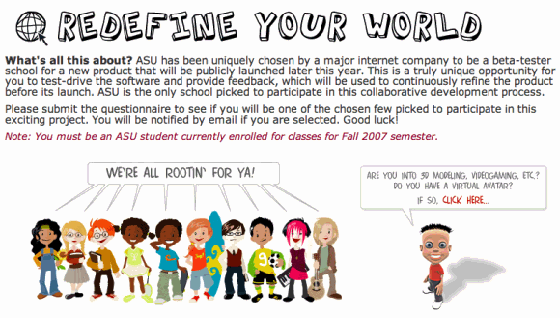