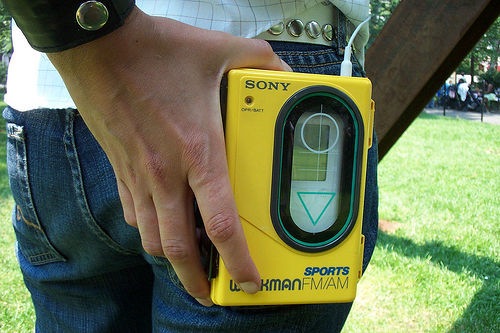 Locking players to specific software, tracking digital music downloads, and now requiring authorization chips for compatibility with accessories… Is Apple still thinking different, or is the company following in Sony’s once-ubiquitous footsteps? The Walkman was once king of the hill, and look how far it has fallen; the iPod could very well share its fate, thanks to Apple’s increasingly paranoid (Sony-esque) behavior and a new era on the horizon.

Once upon a time, you and every one of your friends had a Sony Walkman cassette player. It was portable and let you do things with your music you could never have done with, say, LPs or radio. You could listen to whatever, whenever and wherever you wanted without lugging around a lot of equipment. It even managed to persist through most of the CD age. 15 years later, along came digital music, and the iPod became the new standard for taking your music with you.

In the 80s, most of us never saw the end of the road coming for the Walkman, and now that the iPod enjoys similar ubiquity, it sure does give me a sense of deja vu. So much so, in fact, that I asked our own Futurist, Seth Porges, if he could fathom a post-iPod era. He predicts, “Pretty soon, the idea of a dedicated MP3 player like an iPod will be obsolete — we’ll just be able to plug into whatever happens to be laying around, whether it’s a USB thumb drive or our fridge.”

What’s Rotting the Apple
Ultimately, Apple’s downfall may come down to Steve Jobs’s own hypocrisy, as well as how Apple deals with other companies. After all, unilateralism doesn’t win you any friends — or any wars, either.

By now, Jobs’s infamous open letter to the music industry, Thoughts on Music, has become the stuff of legend, a clarion call for interoperability. The public perceived it as the impetus for major labels forays into DRM-free downloads.

His Steveness said in his letter, “Convincing [major labels] to license their music to Apple and others DRM-free will create a truly interoperable music marketplace. Apple will embrace this wholeheartedly.” But to continue locking the iPod to iTunes sure smells of a two-faced attitude. Even worse, new iPods (touch, classic, and nano) are now compatible only with accessories like speakers and even cables that have an Apple authentication chip built-in.

Is this really embracing interoperability “wholeheartedly”?

Stopping developers from unlocking the iPhone certainly isn’t helping Apple any, though in that case, the company is at least beholden by contract to AT&T (in the U.S.) to fight interoperability. And across the pond in Europe, the company is busy defending itself against an antitrust suit in over iTunes pricing and its locked-down player/software combo — a battle that seems to be getting uglier every week.

Finally, the iTunes Music Store is having some pretty serious issues, with Universal excluding it from DRM-free downloads and NBC pulling its shows off the store (at least, they said they would). Now you can get your episodes of The Office for nothing right off NBC’s Web site, albeit with plenty of needless restrictions.

Ironically, Sony is closing Connect, its ill-fated online music store, by next March in favor of a Windows Media-based platform for its music players — in favor of interoperability. Go figure!

What’s Not
Luckily for Apple, the stock options backdating scandal (for which Jobs was subpoenaed just the other day) is unlikely to hurt the company’s image among consumers. But that wasn’t so with Sony — a former CEO was even demoted over the invasive rootkit DRM debacle. Unfortunately, Apple may be headed for a similarly dark place if it turns out that the company follows through on its implied threat to turn unlocked iPhones into expensive paperweights.

Nothing Lasts Forever
With the Walkman cassette player, technology simply rolled onwards and crushed it beneath its wheels. But the Walkman brand couldn’t possibly have had a better head start in the digital music world, and it was steamrolled flat by Sony’s short-sightedness and draconian hardware/software limitations.

The iPod will one day be trampled by the march of tech, too. Apple better hope it can keep up and rule future music-listening paradigms with less of an iron fist if it wants to hold onto its dominance.

Mike Kobrin is a freelance audio technology writer for CrunchGear and many other publications. Every Friday, he writes The AudioFile, a weekly column about digital music and audio gear. Feel free to ask questions, air grievances, or just be a loyal CrunchGear commenter in the Comments section below.

(Thanks to Make for the image above!)