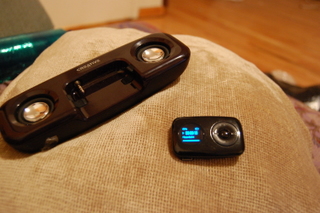 Awhile back I put up a scathing critique of the Creative TravelSound portable speaker (the one that holds the Zen Stone Plus.) Anyway, while I stand by every single one of my criticisms as valid, I have to say I made a huge mistake: This product absolutely rocks, ESPECIALLY if you don’t own the Zen Stone Plus.

After the jump, I go over my criticisms one by one and show why, even if I was right about all of the problems, I was wrong about their effect on the overall experience in a big, big way. This is a product that really grows on you over time, and it took over a month of frequent usage for me to really begin to fall in love with it. And I have.

Previously, I lamented the fact that these speakers seemed incompatible with anything other than the Zen Stone Plus. I was wrong on two points. First: These are designed and marketed as an accessory for that product, so they really have no obligation to make it work with any other player. And second: They DO work with virtually any other MP3 player, it’s just very, very ugly looking.

Using a jutting headphone jack as the plug-in method was a stroke of brilliance. After all–EVERY music device has a headphone jack. I previously speculated that the jack’s position would make it impossible to fit most MP3 players (check out the placement in the pic above). I was wrong. In fact, every player I have tried has worked (even if it hasn’t been pretty.) This includes various iPods, a Zune, and a Sandisk player. It also made me wonder why more speaker docks don’t include a pop-out or stationary headphone jack–there quite simply is no more universal way of plugging in an audio device, and it makes far more sense than having to deal with line-in holes and cables.

I previously chastised Creative for relying on AAA batteries instead of a rechargable. I dropped the ball on this one for two reasons. First: This product is extremely cheap (just $40), and a rechargable battery would have changed that. Second: I didn’t realize before, but you don’t actually NEED the battery. Powering this thing on makes the music louder, but it still plays at a very reasonable level with no power source at all (much like earphones don’t need batteries to pump music.) This is GREAT when you are travelling: Not only do you not need to take a charger, but you don’t even need to carry batteries.

I still feel the rounded bottom was a poor design decision (it is impossible to rest the speaker standing up). If the base were flat or it included a fold-out kickstand (We’ve been informed by a Creative rep that it DOES have a kickstand, you just need to look for it), it would be much easier to rest on a desk, and it is certainly unfortunate that the speaker blocks access to your Zen Stone Plus’ power button when it is docked. But considering the price and more-than-decent sound quality, I would like to say that I am completely sold on this as a great travel companion, no matter what MP3 player you carry.