Each week MobileCrunchArcade compiles the biggest news from the world of mobile gaming.

This Week’s Headlines: Save the World With Heroes; Stewie’s Arsenal Set to Ambush; Skyzone Scoops Out the Action; Glu’s New Political Knockout; EA Hits the Board; Konami’s Contra Contest

Save the World With Heroes 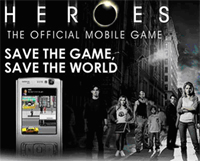 Save the game, save the world! Just in time for the premiere of the second season of NBC’s smash hit drama comes word that GameLoft will be rolling out Heroes: The Official Mobile Game this fall. No word on whether the action will center on season one or season two, but chances are you’ll get to play as a one of a variety of the breakout characters, each with their own unique powers.

Southpark’s Eric Cartman is a genius, an absolute genius. While FOX TV may have convinced people that Family Guy is actually funny, Eric Cartman summed up best when he said that Family Guy is “just one random interchangeable joke after another!” How true. But for some reason people won’t listen to the wisdom of an obnoxious and racist 10-year old. So no doubt there will be people who will downloading Stewie’s Arsenal.

The game will be available in time for the start of the new season and 100th episode, titled ominously “Stewie Kills Lois.”

“What’s more entertaining than a baby with Machiavellian tendencies and a hell-bent passion for world domination?” said Kim Senn, VP, Product Development for Airborne Entertainment. “Stewie’s Arsenal is our best Family Guy game yet, delivering four unique mini-games with uber-ridiculous scenarios that all keep Stewie at the forefront of evil genius.”

What’s more entertaining you ask? Possibly staring blankly at a wall… but I quoted Eric Cartman, so who am I to judge. Filled with mini-games Stewie’s Arsenal allows players to lead the morally disturbed baby on a series of missions to take out his family.

Skyzone Scoops Out the Action

Mobile entertainment provider Skyzone announced the release of Triple Scoop Twist this week. It is a game of strategy and action, and is available on most major U.S. carriers. The gameplay involved hand-eye coordination where players take the role of a soda jerk and must satisfy customers by getting the combination of orders correct. As the game advances the play transforms to more of a business sim, where players can install security to fend off robbers, stock ingredients and attempt to woe more customers.

As casual games go Triple Scoop Twist has the right ingredients, but we can’t help but think that it would have been more appropriate for summer-time fun. After all, who wants to get ice cream as the weather turns cold?

Glu Mobile has announced that it is running for President of the United States. OK, that’s not true, but it seems that practically everyone else is running so why not a mobile game publisher. The company did however announce the launch of White House Rumble, a follow-up to Glu’s 2004 title Bush vs. Kerry Boxing. As before White House Rumble let’s players lace up and punch their way to become the heavyweight of the nation. The game is now available on major U.S. carriers.

“I think people will really enjoy White House Rumble as it lets them see these public figures in a new, unexpected and hilarious way,” said Jill Braff, senior vice president of global publishing, Glu. “It’s healthy to have a little sense of humor when it comes to the world of politics, and that’s the outlet White House Rumble provides. What better way to pass some time than stepping into the ring and trading punches with your favorite politician?”

The Boxers include President George W. Bush and Vice President Dick Cheney, as well as contenders (and pretenders) Hillary Clinton, Al Gore, Barack Obama and Rudy Giuliani. With the election still more than a year away this seems a little early. But maybe taking a swing at the candidates will ease voter fatigue.

EA Hits the Board

Move over Tony Hawk, there is a new board master on the block. Electronic Arts has announced the launch of SKATE, a new high-flying skateboarding game for mobile handsets. Players can hit the half-pipe, perform ollies, grinds and catch some air. The title is available on most major carriers in North America and Europe.

“SKATE delivers all the hallmarks of a quality mobile title with exciting graphics, approachable gameplay and accessible challenges,” said Travis Boatman, VP of Worldwide Studios at EA Mobile. “Whether you’re a hardcore skater or a casual gamer who has never been on a skateboard before, you’ll be able to experience the thrills of extreme skateboard action with simple controls that make it easy and fun for anyone to pull 360s, grinds, kick-flips and more.”

While obviously you shouldn’t look for Tony Hawk, other professional skaters including Danny Way, Chris Cole, Mike Carroll and Rob Dyrdek are present in SKATE, and in the game if you make the right moves in the game you can land on the cover of Thrasher magazine. Whether this one can soar like the Hawk-man needs to be seen, but if it plays anything like the console versions this could be the game to beat this fall. 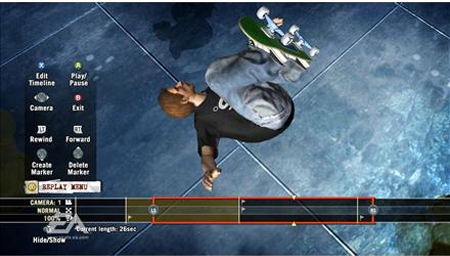 Konami has announced this week the first-ever online design contest for the upcoming Contra 4 mobile game. The competition is open to fans of the franchise, and is calling for designs of their own Contra character in honor of the franchise’s 20th anniversary. The contest will be running from September 18 to October 1st. “Contra 4 will once again demonstrate Konami’s commitment to bring original branded content to the mobile device,” said Joe Morris, Vice President, Konami Digital Entertainment’s Mobile Division.

Winners will be announced on October 7th, and the top 20 designs will receive an exclusive Contra 20th Anniversary t-shirt, while the grand prize winner will have his/her character placed in the game! Contra 4 will be available later this fall on major carriers in North America.