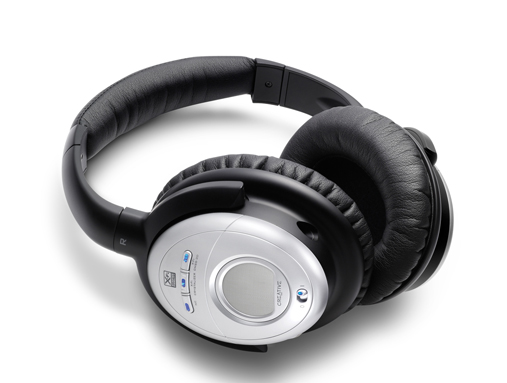 Creative made a bold move by integrating its X-Fi sound enhancement technology into a set of noise-canceling headphones, and it paid off. The Creative Aurvana X-Fi gives more expensive models like the Bose QuietComfort 2 and Sennheiser PXC-450 a run for their money in sound quality and comfort. The integrated sound-enhancement features really set it apart from the crowd, too. They’re not cheap (they list for $299; less at e-tailers), but these killer cans will keep the noise out and your music crystal-clear on your next flight.

The X-Fi’s bear some resemblance to Bose’s QuietComfort2, with its metallic beige earcups and big leather pads, but the similarities end there. The battery compartment, which holds a pair of triple-A batteries, is on the left earcup. On the right cup, there’s an eighth-inch jack for plugging in the included audio cable to your MP3 or CD player, as well as a power switch and buttons for noise cancellation, the X-Fi Crystalizer, and Creative’s CMSS-3D virtual surround sound. All the buttons light up with blue LEDs when active, and there’s a small volume wheel on the edge of the cup.

These headphones don’t fold up, though the earcups swivel 45 degrees, so they lie flat in the included semi-rigid nylon case. Creative gives you a 4.5-foot extension cable, plus dual-mono and quarter-inch adapters for airplanes and home stereos.

The pads on the earcups and headband are made of memory foam, which gently cradle your head; in fact, after about half an hour, I no longer noticed I was even wearing them. In fact, next to the Bose QuietComfort2, these are the most comfortable noise-canceling cans I’ve worn.

The buttons are easy to operate by touch, though I kept having to remove the headphones and look at the LEDs to see which features I’d activated. Radio-style push-buttons might have worked better. You get roughly 9 hours of playback time with the Crystalizer and 3D Feature on from a pair of alkaline AAA batteries (I used regular Energizers), and you can expect about 10 to 12 hours with only the noise cancellation and Crystalizer on. That’s not bad, considering the batteries are easily replaceable, though the Bose QC2 and QC3 last for 40 and 20 hours, respectively, indicating the hit on battery life from Creative’s sound-enhancement features.

Overall, the X-Fi’s sound better than I expected when powered off or on, though the detail and midrange definitely fill in when the power is on. The noise cancellation doesn’t add any serious hum, but a very brief high-pitched sound comes through the headphones when you turn it on. The Crystalizer, however, does add an appreciable hiss. The CMSS-3D feature generally doesn’t work well for music, and only benefits certain types of movie scenes.

Now to the fun part… listening!

Movies
I watched a few scenes from The Matrix on my laptop with the X-Fi’s, and the Crystalizer clearly helped sharpen up things like dialogue and ambient noise. The CMSS-3D feature spread out the sound in the lobby shooting spree scene so I could hear all the individual gunshots clearly. But in other scenes like the “bullet time” sequence, it just made the sound flat. Dialogue seems to be in the right place in the mix with and without the 3D feature, but over I prefer it off.

Music
The Chicago Symphony Orchestra’s performance of Stravinsky’s Rite of Spring sound spacious and full, though you can hear the noise-cancellation circuitry’s slight hiss in quieter passages. This won’t be a factor in noisy environments, but it could be an issue if you’re looking to silence an already quiet room. They handle the dramatic dynamics very well.

Acoustic jazz like Sonny Rollins’ “Blue for Philly Joe” from Newk’s Time sounds well balanced in the mids and highs but with exaggerated bass. (I used my iPod’s Bass Reducer setting to correct this, and it improved the sound a lot.) Benefits nicely from the Crystalizer.

Balance and detail is excellent on bossa nova classics like “Corcovado” from Stan Getz and Joao Gilberto’s Getz/Gilberto. The strange panning of Astrud Gilberto’s voice all the way to the right on “The Girl from Ipanema” can be rectified by turning the 3D feature, which basically reroutes part of the signal (her voice) to the opposite ear.

On Count Basie’s “April In Paris,” recorded in 1957), the horn-heavy big-band arrangement becomes a little harsh with the Crystalizer on. The bass is a bit tubby, and my iPod’s Bass Reducer didn’t sound so great on it.

Tracks like Interpol’s “Evil” and “Slow Hands” from Anticswith driving bass and loud drums sound punchy and exciting on the X-Fi’s. Modern rock seems to fare best on these cans.

It handles the ridiculously aggressive bass lines like the ones on Stevie Wonder’s “Maybe Your Baby” and “Sunshine of My Life” with room to spare. Bring those high-hats up a bit with the Crystalizer, but leave the 3D off.

Creative’s stuff generally finds its way online for well below list price. So if you can find the Aurvana X-Fi’s for less than the $299 MSRP, you’ve got yourself some rockin’ noise-canceling cans for less than the cost of their designer-brand counterparts. If you’re looking to save a few more bucks, and can live without the sound-enhancement features, check out Audio-Technica’s ATH-ANC7, which can be found for half off the $220 list price online.