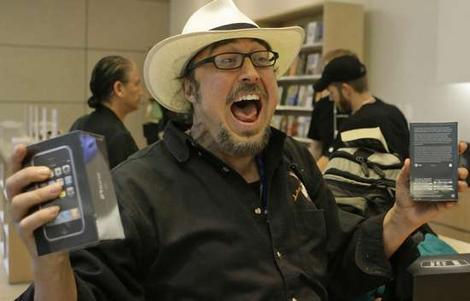 The novelty of the iPhone is far from over, but everyone at the Gear except Biggs is over it. Multi-touch. Yay. It’s an iPod. Yay. It’s a phone. Yay. You get the point. So how do Helio, Nokia, Motorola, and Samsung feel about the iPhone? Read on to see what JW Kim, senior director of product planning and management at Helio; Rob Shaddock, corporate vice president, feature and mass market phones, Motorola Mobile Devices; Bill Plummer, vice president of sales, multimedia and content at Nokia; and Muzib Khan, vice president of product management and engineering at Samsung have to say.

Q: One of the biggest draws of the iPhone is the 3.5-inch touchscreen. Is this just a fad or something users will want in the long term?

HELIO: The touchscreen has been in the industry for quite a while, and it does have problems as much as it has benefits. I think we will continue to see more touchscreen devices, but I don’t think this will be a mainstay in the near future.

MOTOROLA: We think touchscreens are here to stay, but we’re seeing a number of reasons why, insofar as cultural, behavioral, etc. Touchscreens are critical in markets like China where there are thousands of written characters in the language. In the U.S., however, where we have only a 26-character Roman alphabet, people prefer keyboards, which is the fastest and most accurate way to enter data.

NOKIA: Consumers want a touchscreen, but I think it has limitations, most specifically with e-mail and texting, where heavy business users prefer a tactile keypad to a touchscreen.

SAMSUNG: We think some consumers do want touchscreens, and it is our job to provide that option. The wireless industry is all about choice and to that end we feel that we offer excellent touchscreen choices like the Samsung SGH-P520.

Q: Obviously the iPhone has a lot going on under the hood, but do consumers want separate devices for features like music playback, or one do-it-all device?

HELIO: Convergence is all about how you can smartly integrate different features and functionalities that an advanced mobile device can offer. Now, people are asking for more things for less money, coupled with ease of use. Both the Helio Ocean and the Apple iPhone certainly deliver in that regard.

MOTOROLA: We think they do, provided we help them attach that value. If we make it easy, seamless, and intuitive, they’ll take to it-similar to how consumers have adopted Wi-Fi on their PCs.

NOKIA: We think that consumers are very much interested in convergence. We’ve captured this with the N95. From the five-megapixel camera to GPS and Wi-Fi, these functionalities meet the needs and desires of the technology leaders and early adopters, who are really the ones who set tastes.

SAMSUNG: We think GPS is a very important feature. I think it very much depends on the individual user’s set routine; if you do a lot of driving, a standalone GPS device might be a better bet for you, but if you’re someone that uses multiple modes of travel an all-in-one device is certainly helpful.

Q: The iPhone, at less than half an inch thick, can be described as a ‘thin phone,’ but what comes after the thin phone? How much thinner can you go?

HELIO: FIN is the thinnest clamshell in the U.S., at 0.45 inches, and though it meets our three-hour talk time and one-day usage requirement, it probably doesn’t provide much battery life for heavy data users. The drawback is that as LCDs get larger and the device gets thinner you will basically run into a reliability issue where your phone will snap when you sit while the device is in your back pocket. Also, as we see heavier data usage, battery life will be very important; 17 to 20mm can probably support good battery life without making the device bulky.

MOTOROLA: We’re the inventors of thin, and although it is possible to go thinner, we’ve reached a point where consumers are comfortable with the size and thickness of their handset and, instead, they are demanding more and more functionality. This is where we see real opportunity-by offering handsets with new features, innovations, and supporting great applications/services.

NOKIA: We certainly have a number of thin phones, including the N76, which we are constantly working to refine and improve.

SAMSUNG: We think that we can get quite a bit thinner, provided the device remains durable and feels comfortable. That said, there are certainly limitations inherent in a slim design, which we are hard at work on.

HELIO: I do like the way aluminum provides that nice surface feel, like the iPod-very different from the Ocean, which uses soft-touch paint that provides an organic and warm feel.

MOTOROLA: Greater interest in smart phones and multimedia devices benefits the entire industry. Increased coverage drives consumer awareness of the choices available in the market. At the end of the day, all the buzz benefits us, too.

NOKIA: I think there’s something very exciting going on in the industry; what’s happening is that we’re seeing two segments of the market intersect-mobile users and Internet users-and the iPhone is certainly indicative of that trend, which has been our vision for some time with devices like the N95. Others coming to the market and validating our vision is fabulous, in our opinion.

SAMSUNG: We think Apple has made a very attractive multimedia device, and they deserve all the praise that they get, but I think it targets only a portion of the market, in multimedia users and iPod

HELIO: Again, I think the biggest drawback is the lack of a tactile keypad. Corrective texting is a wonderful and a very smart application in the iPhone, but you still have the fundamental problem of mistyping on a touchscreen.

NOKIA: The iPhone compromises in a number of areas including the 2-MP camera, the keypad, GPS, and 3G data, whereas the N95 delivers on all these features without compromise.

SAMSUNG: The iPhone has a number of deficiencies that consumers and analysts have pointed out, including lack of 3G data, dependence on Wi-Fi, no keypad, an internal nonremovable battery, and lack of external memory.

The iPhone Three Months In: What the Competition Thinks [Laptop]