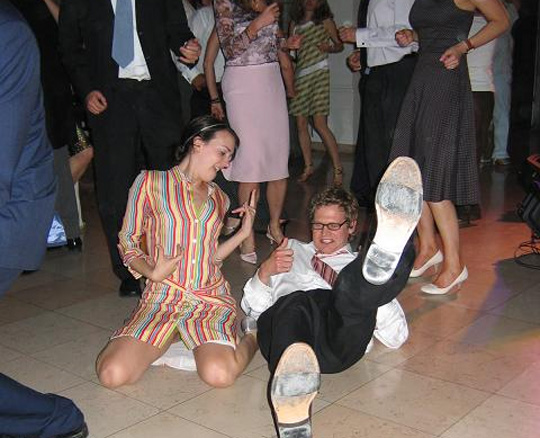 My friend Mike said it best when he was about 17 or so. The story goes that his older sister was having a party while their mom was out of town, and he shirtlessly ran down the stairs and yelled, “All you have to do is party!” and then passed out. Or something like that. The point is, he was right: all you have to do is party. If you’re in college and not living the party lifestyle, then you’re doing it wrong.

We’re not in college, but we live the party lifestyle. There’s an ancient tradition in blogging that requires one to be more hung over than Lohan on a Monday after a weekend in Reno. It’s the way we do it, and the same disciplines can, and should, be applied to your school years. And we’re here to help. 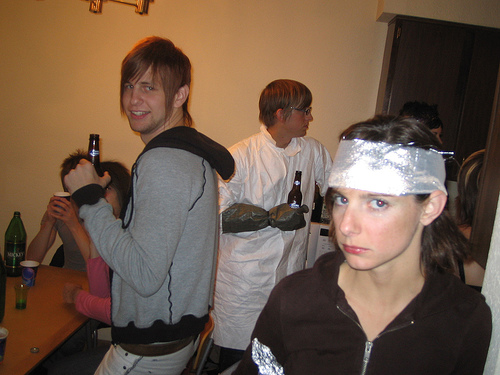 Before we jump feet-first into what we can do to make our party great, we need to come up with a theme for the party. Parties without themes are wasteful things, like making out without a reach-under: you could be doing so much more than you are.

The theme should be something edgy enough to capture the attention of both guys and girls, but also accessible enough that everyone can get into it. A friend of mine threw a merkin party and nobody came, as nobody know what to do. His next party was themed “Edward 40hands”, and was a hit. (For those not in the know, Edward 40hands means that everyone at the party gets two 40-ounce bottles of their favorite malt liquor duct-taped to their hands, and you can’t take it off until both are empty.)

Since this is CrunchGear, you know you’re going to throw a tech-themed party of some sort. Transformers ideas aside, there are lots of ways to get creative. You could, for example, play a game of Simon Says, but instead it could be Sysadmin Says. You know, “Sudo, take off your bra,” or something.

Ok, maybe not. That’s all up to you. But once you’ve got something good, the next step is getting the word out. We don’t have to tell you that the fastest way to spread partyfire is via MySpace and text messaging. MySpace is a no-brainer, post a bulletin, and urge your party people to repost it. Just be wary that this can sometimes lead to partymonsters showing up and eating all the fun by barfing into your punch bowl (that also acts as a RAID array, natch). 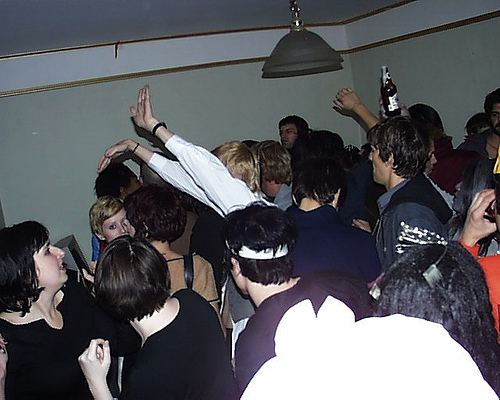 Text messaging is where it’s at. Using a service like Twitter or Dodgeball, you can get the information to many people at one time. Ask themt to spread the word themselves. And get an unlimited texting plan. All providers offer one now, and you’ll thank me later on.

So you’ve got your theme and you’ve invited your party people. Now you’ve got to get things set up. Check your space and make sure that you’ve got enough room for what’s going to happen. Make sure you’ve got some of those plastic cups, because even if you’re BYO, it still makes a party more awesome, and nobody knows why.
Things you don’t want to do include making beer bongs, tiki torches indoors, or lit shots. Trust us on this one. Anything you don’t want to disappear you should hide. Digital cameras, Wii controllers, you name it.

I take that back, the digital camera should be in your hands at all time. Why? So you can set up a party flickr like mine here.

As a geek, you probably don’t have much life experience with the ladies. Take it from me, it’s a bad idea to invite more than one girl you like. You’ll end up with neither staying behind, and that’s not what we’re going for. Invite one, and make her feel special, like it’s her party, and see what happens.

Once things start going, you should really set ground rules early. If you’re not cool with people blazing up in your kitchen, it’s better to let them know before they think of it than when they’re doing it, lest you end up being that guy. If people aren’t following the rules, you should have a couple of pre-assigned buddies ready to bounce them out.

Speaking of pre-assigned duties, you can’t do everything yourself, so designate a DJ. Make sure that it’s known (in a casual way) that he’s the be-all, end-all of the sound system. It’s his domain, and he is the king of this domain. He should be a prepared monarch, thou, having already selected a handful of playlists just for the party. He should be able to switch it up or down with deft ninja-like skills, and he needs to know this. 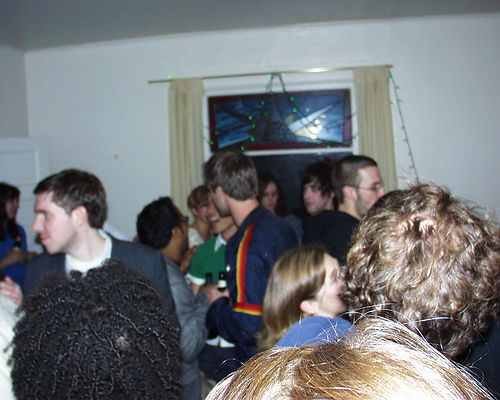 You’ve got entertainment and security, which is a great start. Now all you need is booze. BYO parties are great, because it’s hard to make sure you’ve got enough booze to go around, and to make sure it’s stuff people will like. I think it’s the way to go, but you should also have an alternative. In past Xmas parties at my old house in Olympia (whassup, 187 House people!) we featured a drink called Powernog. It is amazing stuff, and it gets the party going.

Here, for the first time, is the recipe:

Mix everything together in a large punchbowl. (If it’s your mother’s from her wedding, make sure your friends don’t knock it on the floor while making out (sorry, Bryan!).) Using a ladle, fill each person’s plastic cup. Sprinkle a little nutmeg on top, and wait for the bras to come off. This happens every time.

So there you have it, a successful 2007-style geek party. I hope you’ll have as much fun raging as I had writing, and if you’re in the Seattle area, invite me. I’ll bring the fun.