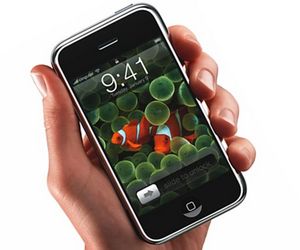 Now that Apple has summoned the UK press to a London briefing next Tuesday, it looks like the iPhone announcement is imminent. There are no other significant details about the event at its flagship Regent Street outlet, but I know the venue and it is only big enough for a medium-sized launch with about 200 people. This suggests it could just be the UK iPhone announcement alone, not the German or French one.

The speculation to date is that the leading 02 carrier will get the contract. A well-placed mobile industry source told me: “02 will get the contract because the iPhone is worth an extra 500,000 customers to them. That will pull them well out in front of any other carrier. Vodafone had talked to Apple but they couldn’t stomach the revenue share deal so walked away.”

That would chime in with two recent hints. First, that O2’s chief executive, Peter Erskine yesterday told the The Times newspaper that he believes revenue sharing with key handset makers is an inevitability: “If sharing revenue brings a bigger pie to the table, then we’ll be happy to share that pie… The revenue-sharing model will play an increasingly important role in the future of converged communications.” That is a major shift in the thinking of any mobile carrier, which tend to protect their networks and revenues like she-wolves.

The second reason why it is probably 02 which has won the iPhone – and not the other likely candidate Vodafone – is that the latter has just launched its own music service, almost certainly as a spoiler for the iPhone/iTunes service. Subscribers to Vodafone’s MusicStation will have access to more than one million songs from major record labels, which they will be able to download directly to their 3G phones for a flat fee of £1.99 a week. However, this will be a rental service, so when customers stop paying the weekly flat fee, their music becomes unplayable. Not a fantastic spoiler to iTunes then.

Lastly, there remains a couple more questions. Whether this will be the 2.5G US-style version of the iPhone or the full-blown 3G version, and whether the phones will appear in stores before Christmas or be launched in the New Year. The latter looks a lot more likely at this stage.

Meanwhile, in the US iPhone sales have increased three-fold, from roughly 9,000 units sold a day to 27,000 units, after the recent $200 price cut, according to a study by Piper Jaffray’s Gene Munster. This is either down to the price cut or to the plethora of free unlocking services which have emerged online, encouraging consumers to try out their existing carrier SIM in the iPhone. Or both.