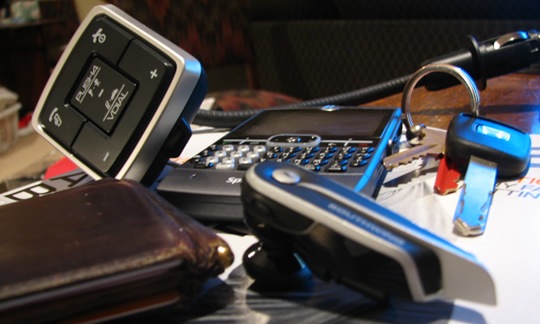 Recently, a package arrived at my house from WirelessGround.com containing two expensive-looking Bluetooth accessories to review. Much to my surprise, I came to learn that each costs a measly $50. So the price is right, but how do they perform? 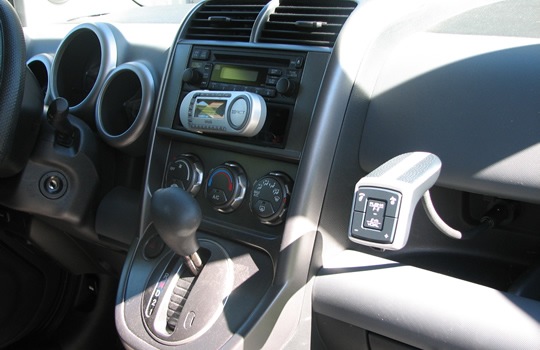 I’ve had my share of run-ins with inexpensive car kits and the SC310 currently holds the record for fastest setup time. I haphazardly scanned through the tiny map-like manual to find the pairing code (it’s 0000) and hopped in my car, hoping that I’d be on my way in a matter of minutes. Well, it took less than a minute. I plugged the doodad into my cigarette lighter, searched for and found it in my phone’s Bluetooth manager in under ten seconds, entered the code and I was off. So far so good.

The car kit has a cool, bendy arm that allows you to position it any which way depending on where your lighter socket is located. I drive a Honda Element and the socket is over directly in front of the passenger seat, further away than most cars. I knew that this might have been problematic but I also figured that it’d be a good way to test how well the microphone works.

I called my soon-to-be wife and after a minute or two of idle chatter I asked her if I sounded different. She said, “sort of…it’s kind of like if you were to call internationally…it sounds like you’re calling from another country…it’s not bad, just a little different.” I asked her if she could tell that I was on a speaker phone — if it sounded like I was in a fishbowl, but she said it didn’t. It just sounded a bit different than if I were to hold the phone next to my face. I leaned way over and put my big fat noggin right next to the microphone and asked her if it sounded any better and she said it sounded the same. So score some points for a good mic with responsive volume leveling.

The four buttons around the outside of the device are pretty self explanatory — there’s an answer button, an end call button that doubles as a power button when held down, and two volume buttons. Easy, peasy, lemon squeezy. 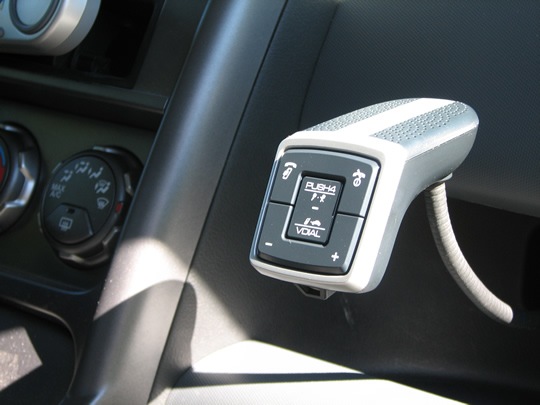 The big button in the middle was a little more perplexing. The top of the button says “PUSH4” and has a little mute/unmute microphone icon and the bottom has an icon of a cellphone next to a car with “VDIAL” written underneath it.

The VDIAL button hooks into your phone’s voice dialing software (if your phone has such a feature) so you can simply press it and say “Call Persephone”. The little phone-next-to-car icon is used during a call to transfer back and forth between your handset and the speaker. Easy enough.

Would I pay $50 for this car kit? Absolutely, I would. Especially after the last $40 piece of crap Bluetooth car kit that I bought at Target. I don’t know what I was thinking. This car kit makes the Target one look like a crying baby that just wet its pants and fell over. It’s a great kit for those of you who want to be able to talk and drive but don’t want to spend all day setting the thing up and/or take out a second mortgage to do so. Plus, it’s very sleek and solidly built.

The SH505 Headset is a Bluetooth 1.2 device that weighs next to nothing, is good for up to 10 hours talk time and 300 hours standby, and comes with wall charger and a…what’s this…a USB cable? According to WirelessGround.com…

“This is the first headset available with a PC application. This application makes it possible to easily upgrade the headset using a PC. It allows upgrading the software to make it compatible with new mobile phones. It also allows adjusting the headset’s main settings such as the favorite number button, volume, ring tones and automatic call pick-up.”

Boy oh boy, talk about something that every Bluetooth headset should have. I set the software up in Windows XP with no trouble at all and, upon first starting it up was greeted by the following screen.

Would I like to upgrade my headset’s software? Why, yes I would. Thank you very much for asking so politely. 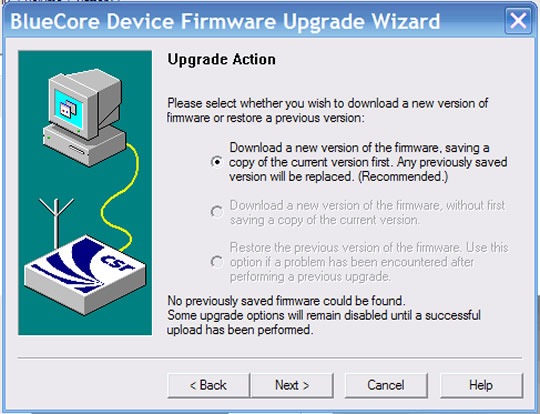 You’re going to back up my current firmware, download the new version, and install it on my device for me? Could this get any easier?

The software also lets you assign a favorite PUSH4 number, toggle auto answer on and off, set the headset’s sleep mode, assign one of 12 different ring tones, and adjust the earpiece volume.

I decided to take my chances installing it on Windows Vista, which worked fine until Vista spazzed out and slammed into the wall three or four times before throwing up on the carpet just like it does every time I plug any sort of newfangled device into my computer. Your mileage may vary. I’ve had a hell of a time getting anything to work reliably so I can’t dock Southwing in this respect. Maybe I’ll give it another whirl when Vista Service Pack 1 comes out three days from never. Basically, what happened is that the device installed fine, the software installed fine, but when I started the software, Vista told me that the device wasn’t connected. I’ve had similar trouble with external hard drives, gamepads, and my digital camera.

At any rate, the headset itself is tiny. I didn’t even notice the included wrap-around ear clasp at first — I just shoved it in my ear and it stayed there. If you’re going to walk around all day with this thing in your ear wearing a cowboy hat, too-tight jeans, and a braided belt, you might want to use the clasp so it doesn’t fall out. If you’re just going to sit at your desk and use it if and when you get a call, you should be fine just popping it in your ear. It stays there pretty snugly. There’s also a little loop attachment that you can instead use to attach the earpiece to your cell phone or even your clothes.

Call quality is excellent. People I talked to said I sounded just as good using the headset as I did using my normal handset. I was able to leave the device in my ear for over an hour comfortably. Good stuff all around.

Like the Southwing car kit, the headset is also currently on sale for $50, with a regular price of $100.

Final Thoughts On Both Devices

I’m not a huge cell phone accessories guy. I’m also cheap, so I can’t see myself spending $100 on any cell phone gadget other than a phone itself. That being said, I think the car kit is a steal at $50 and I’ll happily be keeping this one to use on a daily basis. Other kits I’ve owned have been cheaply made, cumbersome, and a pain in the ass to set up. This one is well made, easy to use, and looks nice in my car. And, again, at $50 it’s going to be pretty tough to find something that’s as easy to use and looks as good. I’m not sure that I’d pay $100 for it, but that’s only because of my weird money issues. I blame my father and his entire side of the family.

Likewise, I think the headset’s a great deal at $50. The software part alone is worth the price of admission, plus the piece itself works really well and is comfortable to wear. You can surely find cheaper headse
ts but you won’t find one at $50 that’s got the same feature set as this one. Again, would I pay $100 for it? Probably not, but I don’t talk on the phone enough to necessitate the use of a headset. I find that short, terse sentences keep my talk time to a minimum. At $50, though, it’d be hard to pass this up if only to use it for really long customer service calls or things that require two hands like sandwich making and the occasional bar brawl.