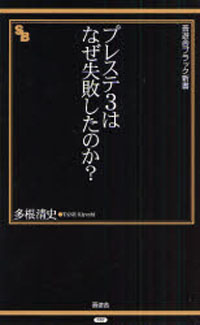 Plenty of folks are acting like the PS3 has sentenced Sony to financial ruin. Not this guy though, a Japanese video game journalist whose book Why Did The PS3 Fail? explores the steps and missteps that lead to Sony where it finds itself today: the butt of every 14-year-old message board poster’s joke. Yeah the book’s in Japanese, meaning that I’ll never get to read it first-hand, but others have, and say that it’s an even-handed look at Sony and its video game console.

So if you read the Japanese language and want to see an insider’s take on how Sony fouled up, apparently this is the place to turn to.