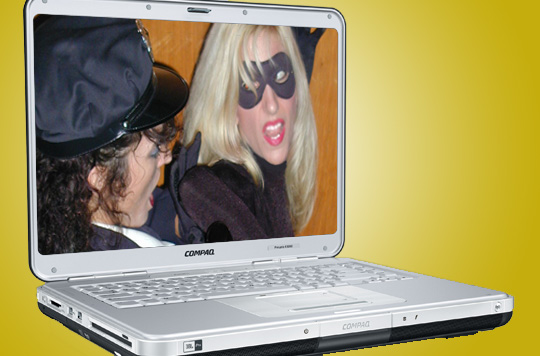 Each year in the USA, roughly a half-million laptops are stolen. Last night, Yours Truly became a statistic. We’re still not sure how it happened, but as I chatted with a friend and ate chicken curry, a clever thief figured out a way to pop the trunk of my car from the outside and made away with my prized Powerbook and my lovely Bill Blass bag.

In hindsight, it’s always easy to say, “I shouldn’t have left it there, even for a moment,” but that’s pointless. Sure, I could have taken security measures that would have prevented this from happening, but I’m part of the it-won’t-happen-to-me club. Well it did, so I’ve been researching ways to prevent it from happening again, and I’ve decided to share these thoughts with you.

The first thing, of course, is to use any common sense you have. While it wouldn’t have necessarily helped me in this case, it should for most other circumstances. Laptop thieves tend to be of the opportunistic sort, not pre-meditated masterminds. They see something they want, they go for it. By simply keeping your head about you and maintaining a secure environment, these brigands are foiled. 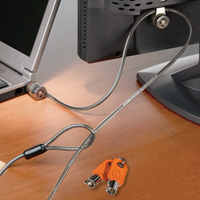 To that end, it’s important to do what’s simple: Keep an eye on your junk. Just turning away for a moment gives the thief the chance he or she needs, and once they’re gone, you’re likely never to see the laptop again. But that’s not always feasible. Desk locks are great for your home or office, and portable enough to keep with you. They’re the computing world’s version of bike locks, and like bike locks they’re not used often enough. They’re inexpensive, anyone sporting a laptop should think about them.

But I need something a little more robust. I’ve never been ripped off while using my gear, it’s always during the downtime. The idea of a safe that I can take with me is appealing, and there are a few on the market. In particular I like the $99 N-Case, though it seems rather large and bulky. The idea that the case is a safe, and can be secured, means it’s got a good combination of portability and security.

The idea of lugging it around, though, doesn’t sit perfectly. I found this Laptop Locker to be quite useful looking. By mounting a laptop-specific safe in my trunk, I’d be able to keep my nice, portable bag, while keeping it secure while I’m away. For me, it’s the right match.

There are technical solutions, as well. Companies like Vancouver’s Absolute Software use a technique of letting the stolen laptops phone home. When a covered laptop connects to the Internet, a signal with the identifying information is sent to their servers. If the laptop is listed as “missing”, steps are taken to track it down, and ultimately to recover it.

Other systems use GPS monitors to pinpoint your lost lappy, though they’re quite a bit more expensive.

Another way to keep your notebook out of harm’s way is to use camouflage. If you’re carrying around a $15 nylon Targus bag, thieves are going to know what’s in there. I used a very nice Bill Blass attaché case. It fit my Powerbook wonderfully, and had enough room for a power supply and many (many, many) gadgets as well. It didn’t look like a laptop bag at all, thought that didn’t stop my thief from grabbing it straight away.

In all, the laptop’s worst weakness is also its greatest feature: portable things are easier to steal. While you could make it 100% secure, you’d also make it so un-portable that the point of owning it becomes debatable. But by following a few of our suggestions here, you’ll be better off than the average laptop victim.