You’re not going to be looking at YouTube videos or surfing the Web on these music players, a few of which don’t even have screens. But there’s one thing these players are all good at: Letting you play up to 1000 songs with sweet sound quality for south of $100.

Now You See It…
These first four sub-mini players have screens ranging from the comparatively roomy to the impractically small, but they all have a surprising number of features besides MP3 playback, and they all sound good. They come in sizes from 1GB (225 songs) to 4GB (800 to 1000 songs). Ignore the Toshiba player if you’re a Mac user — it’s Windows-only. 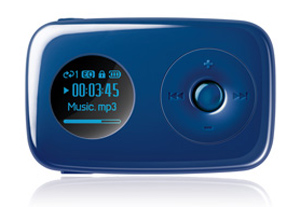 Creative Zen Stone Plus
With a 4-line blue OLED screen to show you what’s playing, the Zen Stone Plus isn’t the flashiest player out there. But it’s got a built-in FM radio and voice recorder and comes in six different colors. The rechargeable battery lasts for about 9.5 hours, which isn’t terrible for a little player like this. You get 2GB of flash memory for $69.99, or you can get a 1GB version without the screen, radio, and voice recorder for $39.99. Creative has a small portable speaker specifically for the Zen Stone series, though our own Seth Porges was not impressed. You can even turn it into a geektastic watch with an optional wristband. It works with Macs and PCs via drag and drop, and it plays MP3, WMA, WAV, and Audible files — no AAC or protected music. 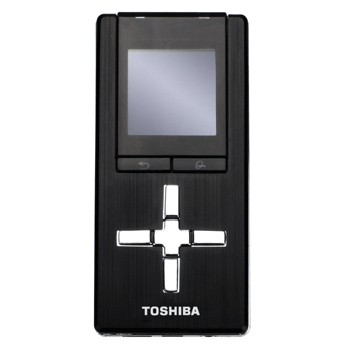 Toshiba gigabeat U
The latest in Toshiba’s gigabeat line doesn’t do video or have a Windows Mobile-driven interface like its bigger siblings. But this 2GB ($99.99) player has a full-color 1.1-inch OLED screen and supports photos in addition to MP3, WAV, WMA (including protected), and WMA Lossless. It’s a relatively big boy at 3 by 1.4 by 0.5 inches, but it packs an FM radio and can do line-in and FM recording. The crossbar-shaped controls are very easy to use, though the interface lacks a bit of polish. Toshiba makes good use of the size by including a battery that lasts for around 20 hours of playback, and the matte silver or black finishes both look pretty cool. Check out my full review here. 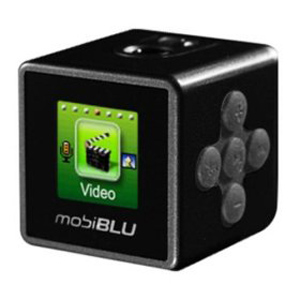 MobiBlu Cube2
I don’t know how much video you’re going to watch on a 0.6-inch screen, but the MobiBlu Cube2 can play it. This 1-inch cube-shaped powerhouse does video, photo, FM radio, and voice/FM recording. It also handles OGG, MP3, WMA, and protected WMA audio files, plus MPG and WMV videos, and it has very flexible sound-enhancement options. The included video conversion software works okay, though it can be a bit buggy at times. The cube shape kind of sucks in your pocket, but it comes with lanyard-style earbuds, and you’re meant to wear the player around your neck. The battery lasts for around 10 hours, and the player works with Mac and PC (drag-and-drop). The control buttons are a bit awkward and the interface is definitely geared toward the more forgiving Korean crowd, but you get 2GB for less than $80 online. 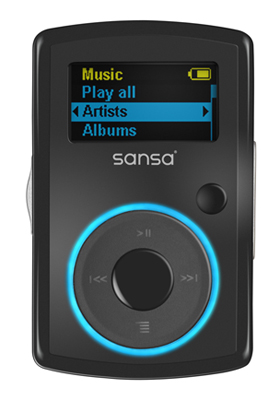 SanDisk Sansa Clip
Not to be outdone (in wearability at least) by the iPod shuffle, SanDisk recently busted out the Sansa Clip, which has a built-in clip to hold the player to your clothing. The 5-way button looks suspiciously iPod-inspired, but the Clip is nowhere near as tiny as the shuffle. Aggressively priced, it comes in 2GB ($69.99) and 1GB ($39.99) flavors and sports a 4-line 2-color OLED screen, voice recorder, and FM radio. The battery is good for about15 hours, trumping all here but the Toshiba gigabeat U. The 2GB model comes in 4 bright colors, though LED around the controls remains blue. It plays MP3, WMA, protected WMA, and Audible files, but it shuns Macs like the plague, requiring Windows Media Player for syncing.

…Now You Don’t!
In some cases, a screen is more than you need in a music player — maybe you’re working out, running, or just cruising around town in your Steve Maddens and trying to make a geeky fashion statement. Keep in mind that with these, you’re paying for the design more than anything else, and some players with a screen and more memory actually cost less (see above). 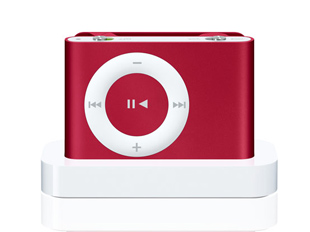 Apple iPod shuffle
The iPod shuffle seems to be a favorite as much for its tiny size and built-in clip as for its simplicity and iTunes compatibility. When Apple revamped its entire iPod line last week, the only change to the shuffle was the availability of a few new colors, including a (Product)RED version; the 1GB player still costs $79.99, which is no longer quite the bargain it once was. The 12 hour battery life beats out many other players listed here, and there’s a tiny battery indicator light to tell you when juice is getting low. The shuffle requires a special cable-dock with an eighth-inch connector, so it won’t work with iPod accessories that require a 30-pin dock connector. (You can still use the headphone jack to line audio out to a speaker though.) You sync it with iTunes like regular iPods, no drag-and-drop. 5-way button, hold switch, shuffle swtich, battery indicator. 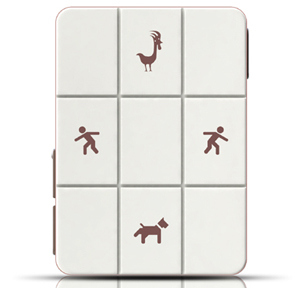 iRiver S7
Definitely the most bizarre-looking player on the block, iRiver’s S7 is tan-and-brown1GB music player that lists for $79.99. Despite not having a screen, the tiny S7 includes an FM radio, and it’s only slightly larger than the iPod shuffle. The oddness comes from the buttons, which are labeled with a crowing rooster, a peeing dog, and a pair of running boys. The 8 hour battery life isn’t impressive, but the sound quality is very good and benefits from SRS sound enhancement. It’s got strange quirks, like not being able to pause during playback, but at least works with Macs and PCs. It plays ASF, MP3, OGG, and WMA formats, but lacks any DRM support. I’m not crazy about the lanyard headphones, but the player is light enough to wear comfortably around your neck. 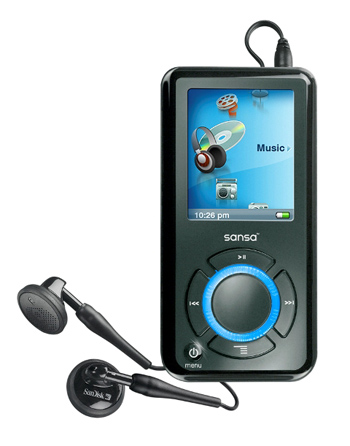 Big Deal
One player in particular stands out as a great bargain: the SanDisk Sansa e260. It’s a 4GB player with a microSD expansion slot for $99.99 (on Amazon), and it does video, photos, radio, music (including online subscriptions), and recording. Plus the blue backlit mechanical scroll wheel is kind of neat-looking. This is a very solid player that’s going for peanuts. SanDisk and other companies like Altec Lansing have plenty of accessories for it, too.