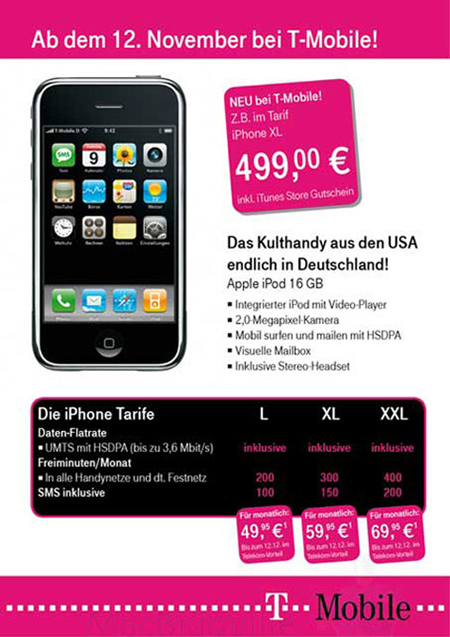 It looks like I won’t be eating my hat anytime soon if this purported ad from T-Mobile Germany is legit. Typically an ad like this wouldn’t be worth the time to report because we know the iPhone will be launched in Europe by the end of the year, but take a gander and you’ll notice two things of interest. Again, if this ad is legit then the Europeans will be getting an iPhone with 16GB of memory and 3G (UMTS & HSDPA) on November 12.

This all makes sense considering the price drop on the 8GB, elimination of the 4GB model and introduction of the 16GB iPod Touch. Apple already knows consumers are willing to pay $600 for one. We always want more space and a 16GB iPhone even has me frothing regardless of all the faults that have prevented me from purchasing one.

Everything else seems to be in order except for one glaring typo that refers to the iPhone as an iPod. It’s not that big of a deal since it is an iPod, but it’s an indicator that this could be a photoshop job gone wrong. Pricing for the Euro 3G iPhone is set at 499 Euro.