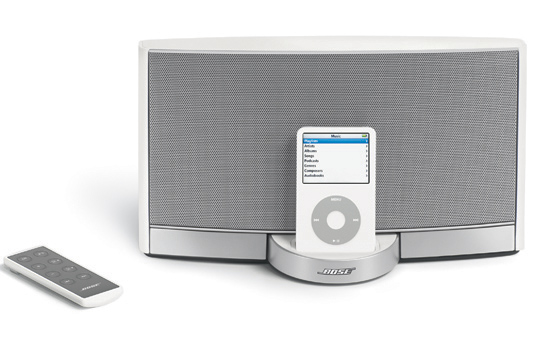 It’s just about universally agreed that the original Bose SoundDock was and still is one of the best iPod speakers on the market. My big gripe with it was always that it just isn’t truly portable because you have to plug it in. But no longer. The SoundDock Portable is surprisingly similar to the AC-only version in both sound and power; it’s the loudest and best-sounding thing out there by far for its compact size. Of course, at $399, you’re paying through the nose for the Bose-ness of it all. Available to regular Joes at the end of September.

The SoundDock Portable’s glossy white shell (also comes in black) measures a very compact 12 x 6.7 x 5.1 inches and weighs 5.2 pounds. It looks a lot like the original version, but the iPod dock justting out from the bottom front can rotate into the body like a swiveling bookcase in a horror flick.

The overall design is very minimalist, with no on-board controls except a pair of touch-sensitive volume controls on the right side. Each of the eight buttons on the included infrared remote’s rubberized surface is ringed with a little lip, so it’s extremely easy to operate by feel. It controls power, playback, volume, and playlist skipping, but not browsing your iPod’s menus or music. I had no trouble using the remote in my living room from most angles.

The only connectors on back are for analog eighth-inch input and the included power charger; no video outputs or USB port. The lithium-ion battery is rechargeable and easily removable by pushing and turning a pin on the back, which is a huge plus. No word yet on spares, but you get anywhere from 3 hours of playback at full volume to around 8 hours with normal usage. Not bad given the level of bass performance, which can drain batteries quickly.

I’m not crazy about the sensitivity of the volume buttons on the side, but you can always use the very responsive remote instead. I like that your iPod charges even when the speaker isn’t plugged in, but be aware this will drain the speaker’s battery faster. The SoundDock is very easy to carry via the handle on the back, which pulls double duty as the system’s bass port (or Wave Guide exit, as Bose puts it).

An LED behind the speaker grille lights up when you press a button on the remote or on the speaker, and it flashes red when the battery needs recharging. You can also check power level by holding down the remote’s Off button. Note that if you leave the speaker unplugged and unused for 14 days, you can only turn it on again by plugging it in.

Bose didn’t include any dock inserts; you’re meant to use the one your iPod came with. The universal power plug has a cable winder on it that makes it convenient for travel, but the plug itself is enormous and takes up a lot of outlet space. For $399, it would have been nice if Bose gave you a travel case or bag, but it turns out you have to pay an extra $59 for that. Boooo.

Acoustic jazz like John Coltrane’s “Blue Train” sounds full, though the cymbals are a bit on the harsh side. Some simple bass and treble tone controls would have fixed this better than forcing owners to use the iPod’s inflexible equalizer presets. The bass is tight enough that it can stand a little boost without becoming muddy. Still, it’s hard not to be overwhelmed by the highs. Excellent detail in the mids, with the tenor sax at a comfortable spot in the mix. Very lively all around.

On Sergei Nakariakov’s classical trumpet and piano duet album Carmen Fantaisie, you can hear every nuance of the trumpet, including the young Russian’s breathing and the trumpet valves moving, and the piano comes through clear as bells. In larger orchestral pieces like Maurice Andre’s rendition of the Hummel Concerto, each section (woodwinds, brass, strings, percussion) is clearly separated from each other, and the soloist is presented clearly but not too up front, though you do lose some sense of the group’s size.

Interpol’s Antics album, especially electric bass-heavy tracks like “Evil” sound downright exciting. I used an MP3 version I downloaded from eMusic, and it still had plenty clarity and punch to it. The Red Hot Chili Peppers sound driving and forceful, since the SoundDock Portable eats Flea’s overdriven bass parts for breakfast. This is some of the

Reverend Horton Heat’s Revival and Phish’s Picture of Nectarsound better on instrumentals than they do on vocal tracks. Those midrangey male singers tend to get a bit overwhelmed by the rest of the music thanks to a slight dip in the mids where some vocals and guitar sounds land. Bass and drums sound beautiful with lots of punchy definition.

On the Jackson 5’s “I Want You Back” you can hear the congas, which often get lost, just as clearly as the tambourine, and vocals come through this dense track very clearly. The bass and high-hat cymbal really shine on Bob Marley’s “Exodus”, though the vocals are just slightly recessed. Jay-Z’s “Justify My Thug” and “Change My Clothes” have surprising power and thump coming from such a tiny place, and Jay-Z’s lyrics have all the presence and clarity that they do in a club.

$399 is a lot to pay for an iPod speaker, but this one happens to sound exceptionally good — better than any other currently available portable model, in fact. If you can shell out the dough, you won’t be disappointed, except maybe by the lack of carrying case to protect your expensive purchase.