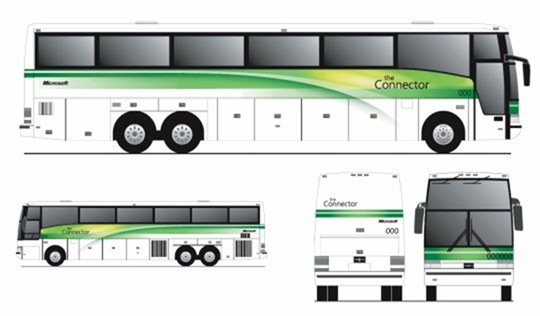 Many of the cars on the road could very well belong to Microsoft employees and, starting September 24th, Microsoft’s new regional bus service will “take 240,000 cars off [the] roads per year.”

The Connecter, as it’s called, “will run five routes in the region, in Seattle, Issaquah, Mill Creek, Sammamish and Bothell, each with several stops. The service will accommodate up to 1,000 employees daily via its Wi-Fi-enabled buses. The free shuttles are expected to begin service on Sept. 24 with most of the routes scheduling five pickup times in the morning and five in the evening.”

Sound familiar? You might remember a little-known company called Google rolling out a similar service in the Bay Area earlier this year. Google’s buses run 40 routes a day and pick up 1,200 employees.

This seems like a great idea for any large company, especially the Wi-Fi part. Workers can get a little work done on the way into the office, save a pantload on gas money, and perhaps bounce ideas off of co-workers or enjoy a rousing game or two of “I Spy”. Plus, anything that gets cars off the road is a-okay with me.